So how did we decide to get an old bus? Why not a traditional motorhome, fifth wheel or Airstream?

When we decided to full-time RV around the country, we were convinced that we wanted to travel in a motorhome. We really wanted that experience of being in the motorhome as we traveled. The idea of traveling in a truck while pulling a trailer seemed less adventurous somehow. But, we were willing to give all options a fair assessment before just jumping in.

The first family we discovered that was traveling and homeschooling on the road had a big 43ft class C toy hauler to accommodate 6 kids and 2 adults. It was amazing! They had a series of videos on YouTube showing how they built out the garage with beds and storage, how they organized both the inside and storage bays, and how they lived day to day in their rig. We were pretty convinced that would work out perfectly for our large family as well. Built on a massive Ford F750 chassis with a big 300 HP CAT engine with an Allison 6 speed transmission, we thought it had just about everything we needed. One of the coolest features was a massive KING sized bed over the double cab. We were in love. We began the search for their exact RV - a 2008 Four Winds Fun Mover 42D. Unfortunately, even used these units sell for about $125,000: what a heartbreaker. 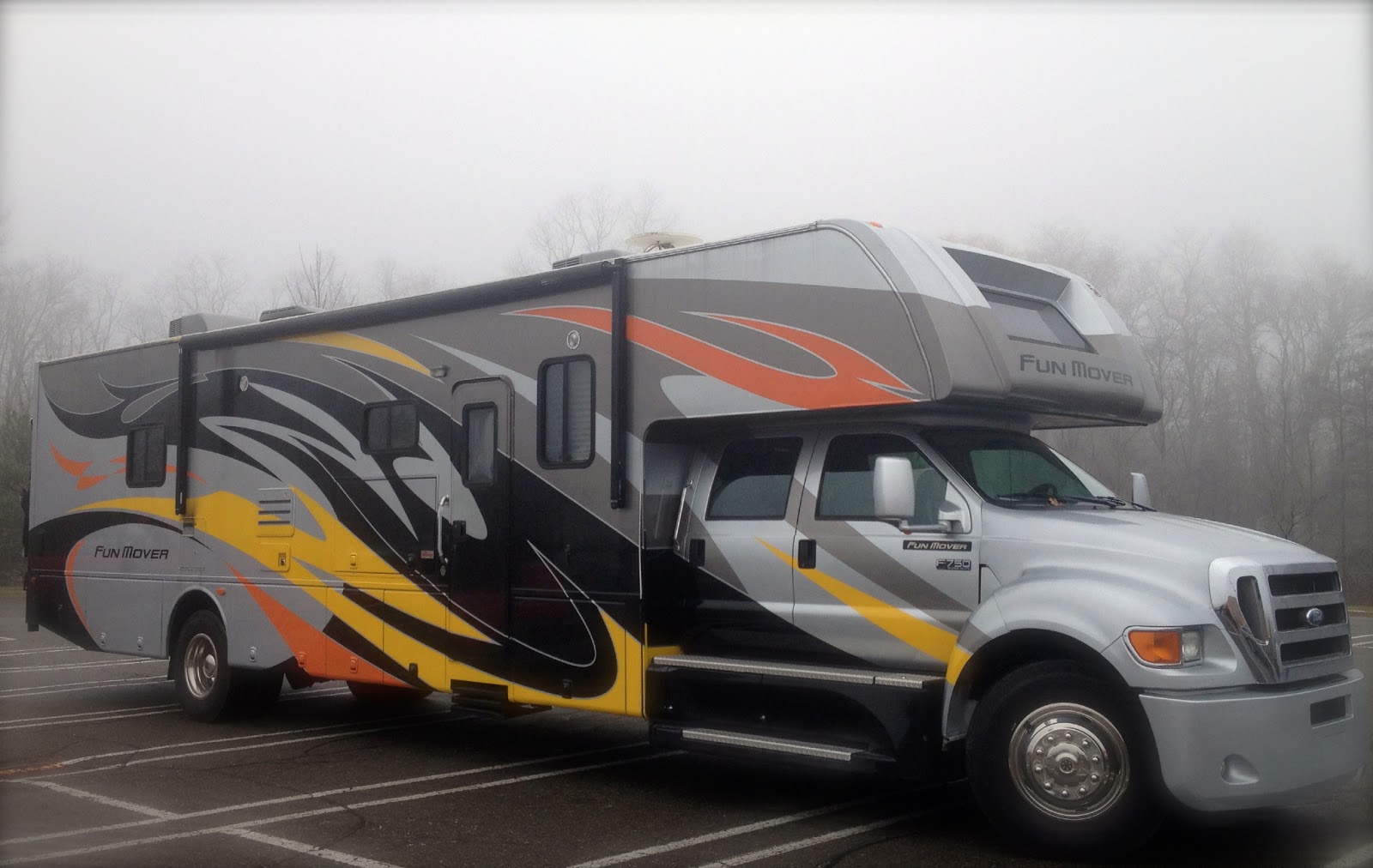 Image is of the actual Norton Family RVSource

As we researched more and started following other RVing families, we noticed that many of them traveled in fifth wheel trailers. These fifth wheels are amazing - like luxury apartments on wheels. Many even have two bedrooms or a toy hauler garage that could easily be converted to a bunk room. After visiting a few RV shows in Phoenix, we felt that a maybe a 5th wheel toy hauler was the way to go, although we still had reservations about driving a truck with 6 people. We really didn't want to stick a kid in the front of the truck with us. With four kids, it seems like the only time we can have a decent conversation is in the front seat while on a drive. And also, we like to hold hands ;).

One motorhome that really caught our attention was the Jayco Seneca 37FS. A Super-c motorhome with a large diesel engine, decent sized bed over the cab, bunks, and a 10,000-pound hitch rating, it seemed like a perfect fit. Except for our wallet. Even used they were well north of $100,000.

Then we noticed a trend. It seemed like many families we followed were “downsizing” in one form or another. They were going from large motorhomes to smaller motorhomes, 5th wheels to Airstreams, even motorhomes to conversion vans. So many of the families we followed with large RVs complained about not being able to get into national parks and boondocking areas, and even about the limited space in regular RV parks. We had only recently been introduced to the idea of boondocking, but the idea appealed to us and influenced our decisions moving forward. (Boondocking is camping out “in the wild” with no hookups.) Visiting the national parks has been a big reason we want to take this adventure, so all of this "downsizing" really caught our attention. You could say we "downsized" before we even bought our first RV.

More research led us to the discovery that the magic number for camping inside many of the national and state parks is 35ft. If we could get an RV that is “35ft or less”, that would allow us easier access to most of the national and state parks. Moving to “longer than 35ft” would make it much more difficult. We know that we could camp at an RV park near a national or state park, but we really want the experience of being inside the parks as much as possible.

We were also considering fresh water and holding tank sizes. Boondocking 101 - you need a lot of water. Since are hoping to boondock frequently and we have six people in our family, we need an RV than can hold a lot of water.

The last piece of information we were considering for a motorhome was the towing capacity. Most of the gas motorhomes have towing capacities of 5000 pounds. That's a bit of a problem because most tow vehicles that can seat the six of us will weigh over that limit. So, we shifted our focus to diesels that could tow 10,000 pounds.

By following folks on social media and YouTube, we tried to learn from their experiences and came up with a list of features we would like to have in our full-time RV:

After a lot of consideration and discussion, there were several things pulling us away from a fifth wheel or trailer. Although fifth wheels have the best layout, and many of them even have a quad bunkroom, they were just too long. The trailers didn't have big enough water tanks for our liking. And, we decided that traveling in a truck three big people across in front seemed like an unenjoyable venture for us.

So we narrowed it down to a 35ft motorhome with as many of the features listed above as possible.

Carrying capacity now became a major concern. Motorhomes are very heavy and they have limits on how much total weight they can carry. What we found is that in the 35ft range of motorhomes, once you fill up with water (which was usually only about 40 to 60 gallons), propane, and fuel, typically you are left with less than 1000 pounds for EVERYTHING else (including the weight of the six of us). Not to mention that most of the hitches on motorhomes this size are only rated for 5000 lbs.

Another alarming trend we were seeing was the frequency with which RV repairs had to be performed. Brand or style didn’t seem to matter much-the one thing all RVs seem to have in common is stuff breaking or the RV itself breaking down. Most of our research seemed to indicate that about 15 years was the typical “service life” for an RV. This number seemed even lower when the RV is “full-time” or lived in - they do not seem to be designed to be used in this manner.

This is when we turned our attention to buses. Unlike RVs, buses are designed for constant operation, often carrying very heavy loads over long distances. It is not uncommon for a bus to travel half a million to 1 million miles before needing any major service!

Because bus companies want to be as profitable as possible - it makes sense that they would purchase the longest bus legally allowed. Laws have changed over the years and buses have grown with those laws from 35 ft to 40 ft and now to 45 ft. Finding a 35 ft bus proved to be a bit of a challenge. Most 35ft buses we were able to find were from 1965 and earlier: “vintage”.

One bonus of these vintage buses is how cool they look. Corrugated metal, rounded edges, rivets, and shiny sides contribute to their unique retro style. 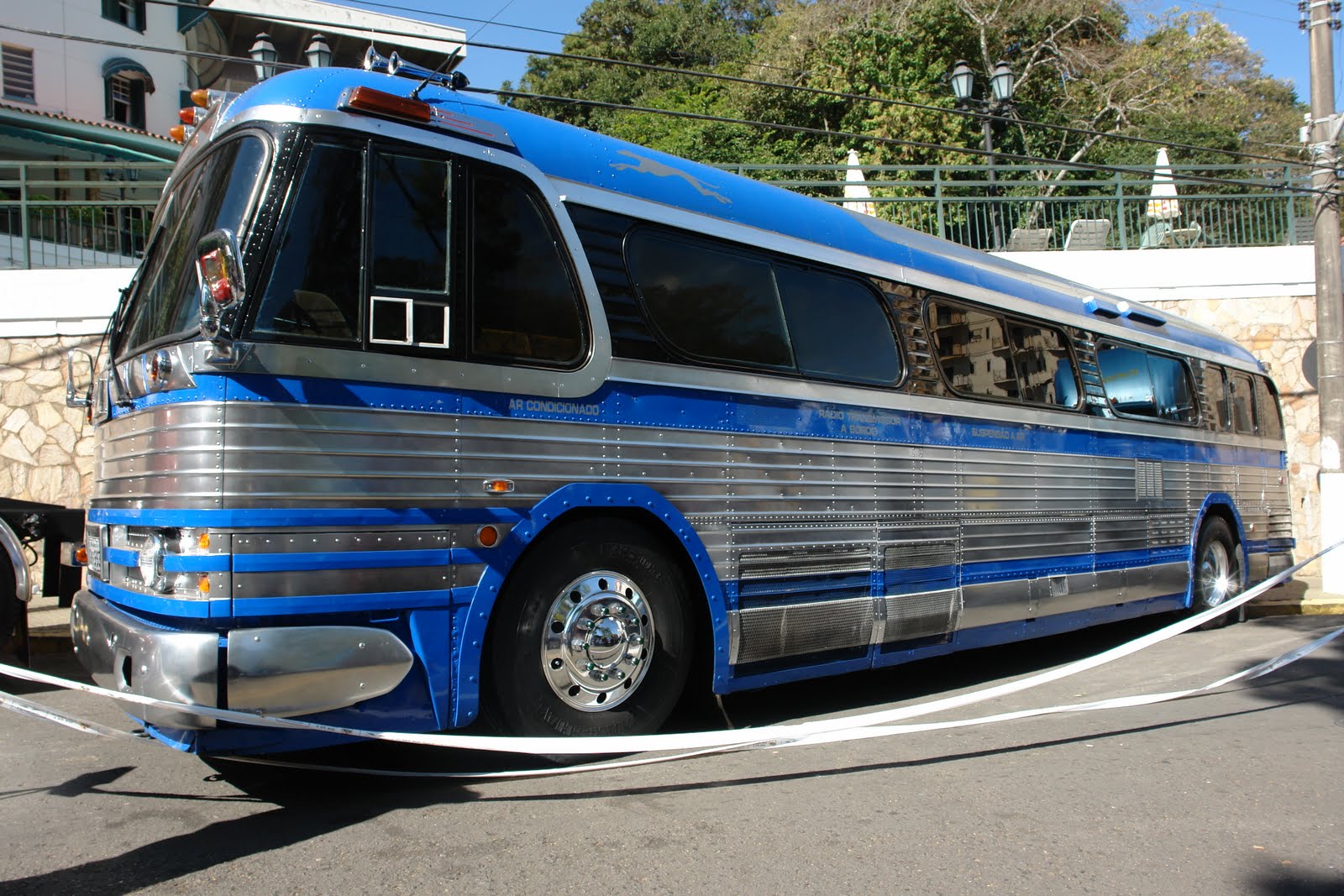 We decided that a vintage bus was a better, more durable fit for our family. As mentioned earlier, buses are built to last - often being constructed of aluminum and stainless steel, with drivetrains heavily borrowed from long-haul trucks of their day.

These old buses also check off the majority of our list. They are diesel engine with a 10,000-pound hitch, have large water and holding tanks, have quite a bit of storage for a large battery and solar set up, have a huge carrying capacity, and we can reconfigure it to sleep everyone in our family. Surprisingly, the going rate for these old buses is anywhere from $10,000-$40,000, which would allow us some flexibility in doing a renovation. We definitely didn't want to go into debt for an RV, and we would have been pushing the limits of our budget with a lot of other options. The downside - trying to find a vintage bus in our area.

We knew that while there may have been easier options in the short term, we were willing to put in the hard work up front to get a longer term benefit: a good fit, customized for our family that we could afford.

The search was on!