We last showed you how we tore down the bathroom. 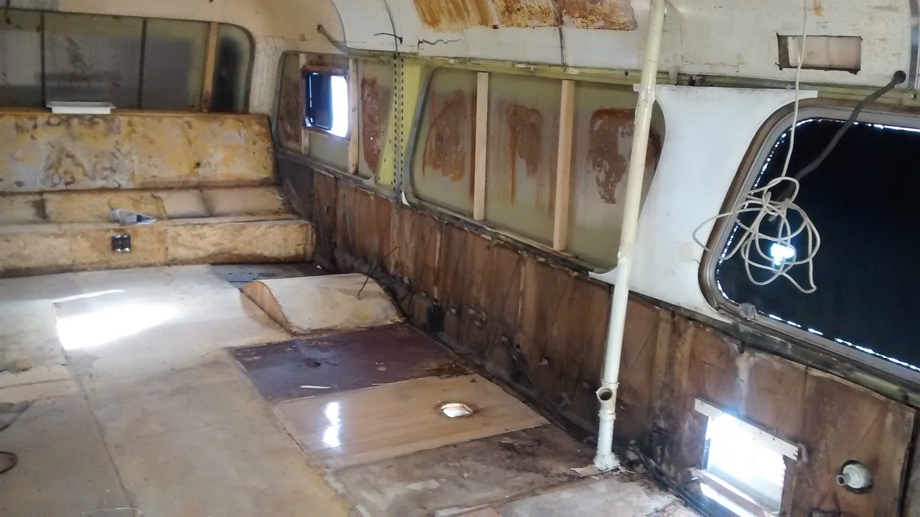 Next up was taking out the box that had enclosed the old electric/LP refrigerator. We will no longer need our refrigerator to be enclosed since we will not be using one that runs on propane, so out it goes. First, however, we needed to get some other things out of the way. There were many different wires running through the box, so we had to pull those out. Since we had already decided that most of the wiring was pretty shoddy, we went ahead and pulled it completely out along with the original breaker box. Belisse loves to be “daddy’s helper”, so she got to help with this part.

We also removed the furnace that was located next to the refrigerator. We will hang onto that for now, although we aren’t sure we are going to reinstall it. We are installing a mini-split A/C unit which has a heat pump so we will wait and see how well the heat on it works before we decide whether or not we need additional heat.

Finally, we were ready to take down the refrigerator enclosure. Once that was down, the bus was completely opened up. It was so crazy to see it like that. It made the demo seem so much closer to done. But, not quite. Unfortunately, one thing we discovered after the enclosure was gone was that the window that is behind it is cracked. Luckily, there is a company that makes them, so we will have to get one ordered to replace it. $$ 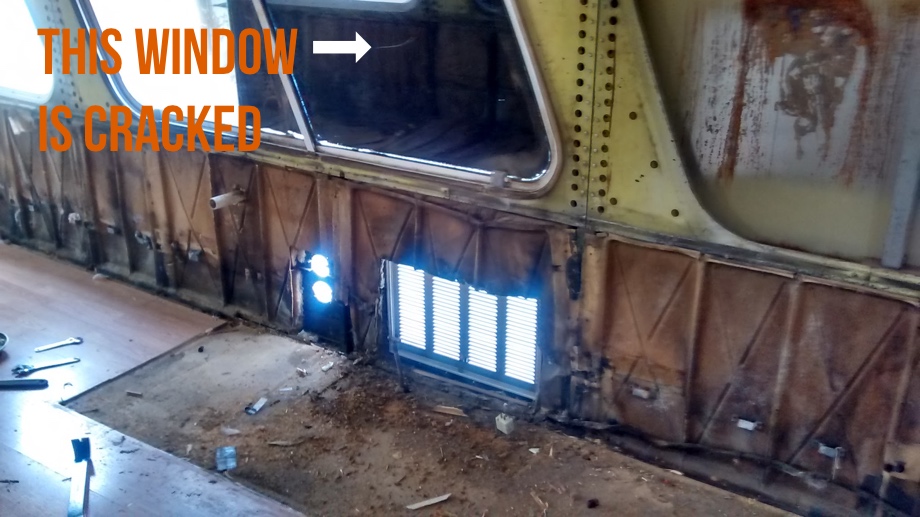 After that, we took out the rest of the paneling and framework from the lower side walls. We decided that the 50+ year old insulation was in pretty bad shape, so we removed that plus the factory cardboard covering the lower sides of the bus. At long last, we were ready to address the floors. 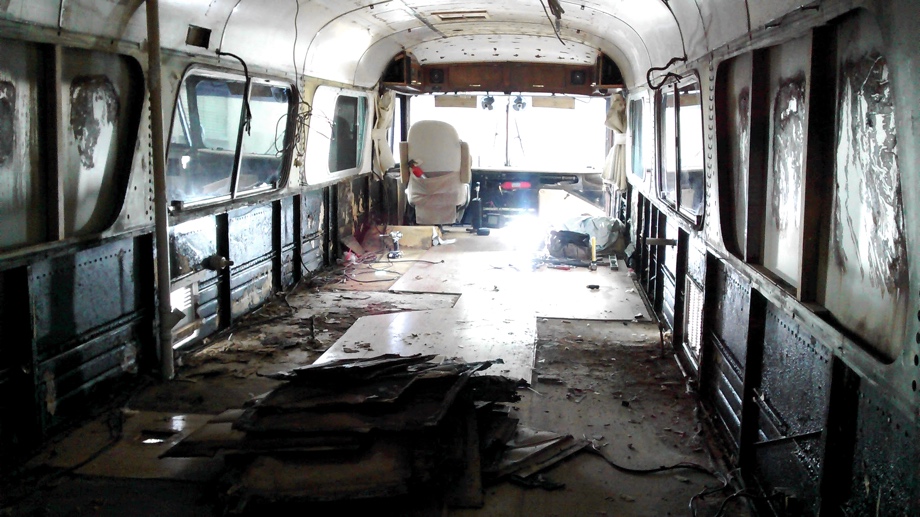 There was a small amount of laminate flooring that was in the living room which easily came out. Then it was on to the subfloor. Now, this was not the actual bus subfloor. It was another layer of subfloor added on top of the original bus floor. It appeared to be in decent shape, but many sections were falling apart. There was no use saving it. In fact, as we were to soon find out, it was about to kick our hineys, and we ended up wishing we could have just set it on fire.

This was the worst subfloor choice ever. I’m assuming that they chose this type of wood because it was cheap. It was a ¾ inch pressed particle board. First of all, it clearly acts like a sponge. The subfloor in the kitchen and bathroom where it had obviously leaked in the past were completely destroyed, almost completely disintegrated with what was probably mold. 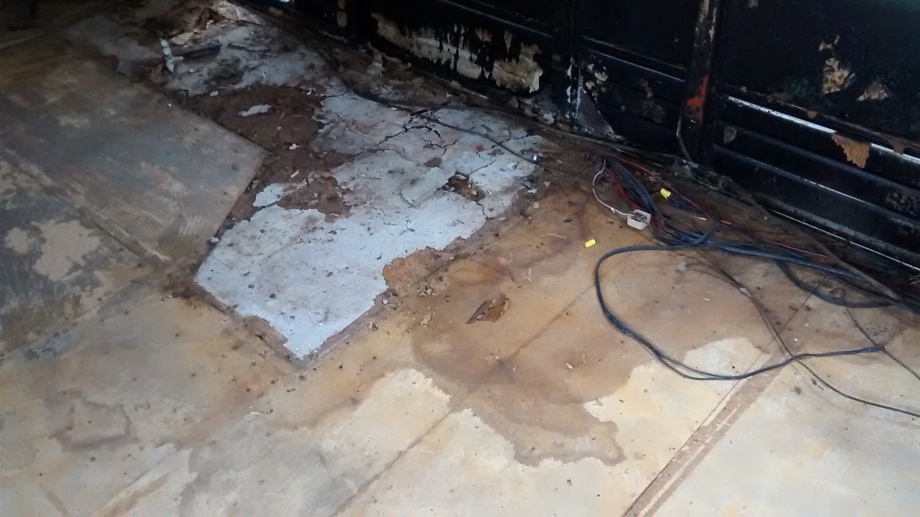 However, the rest of it that was still solid was twist nailed down every two inches. That’s not an exaggeration. The sheets of wood were not screwed down so that we could just quickly unscrew the sheets of wood and easily carry them out. They weren’t even nailed down a reasonable ten or even six inches apart. Nope! They were nailed - twist nailed - down every two inches across the entire sheet of wood. The nails couldn’t be pried out. The only way to remove all of this flooring was to basically chisel it out. 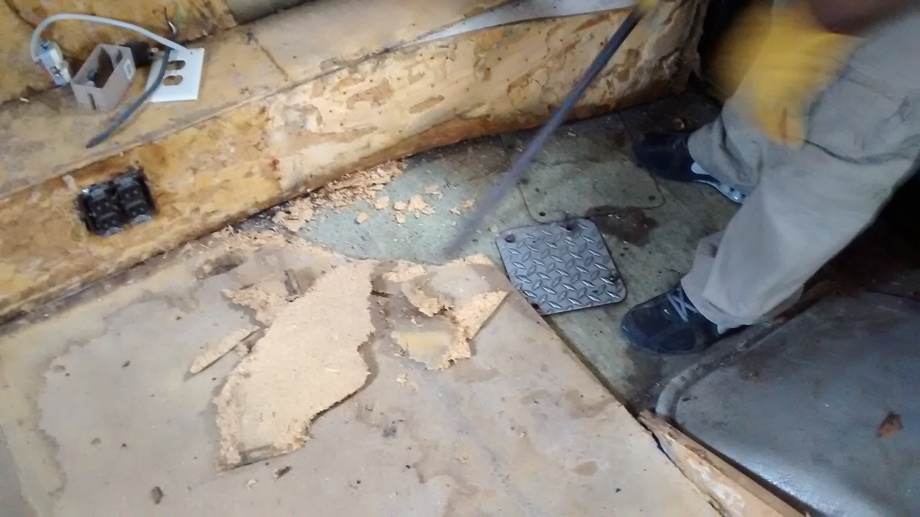 We started in the back of the bus using pry bars and mallets. Oh man...it was slow, frustrating work. Juan and I kept thinking about what would have ever possessed someone to choose this particular type of wood and why, why was it nailed down with twist nails every two inches!!

After a little bit of this, it was getting close to the end of our day and our backs were already hurting, so we switched projects. We went outside and took apart the framework for the holding tank in one of the storage bays. We have ordered new custom tanks that won’t need or fit that frame. It felt good to empty out the rest of that bay and get it all cleaned out.

That night after the kids were all in bed, we set up the lights and got back to the work of removing the floor. We set up our big trash bin outside the open bus window, and every so often we would sweep up and shovel the old floor out the window into the bin. We filled ours up so a couple of our sweet neighbors let us use theirs, too. A few hours later, we had chiseled out about seventy percent of it. 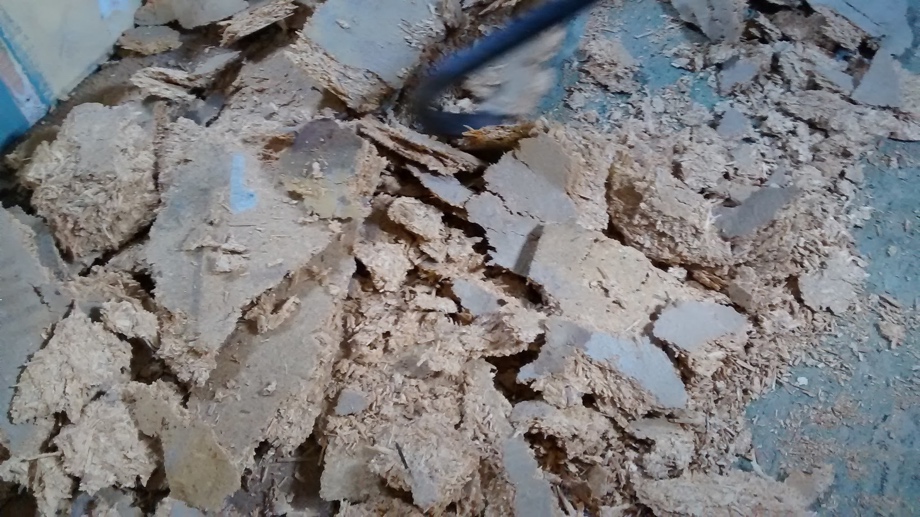 We were exhausted! The next morning, we were back at it though, and we finished removing the subfloor all the way up to the driver’s seat. We stopped there for the weekend. Since we would have to remove the driver’s seat and gearshift box in order to get that floor out, we didn’t want to risk not getting it put back into a drivable state before we had to return it to storage for the week. 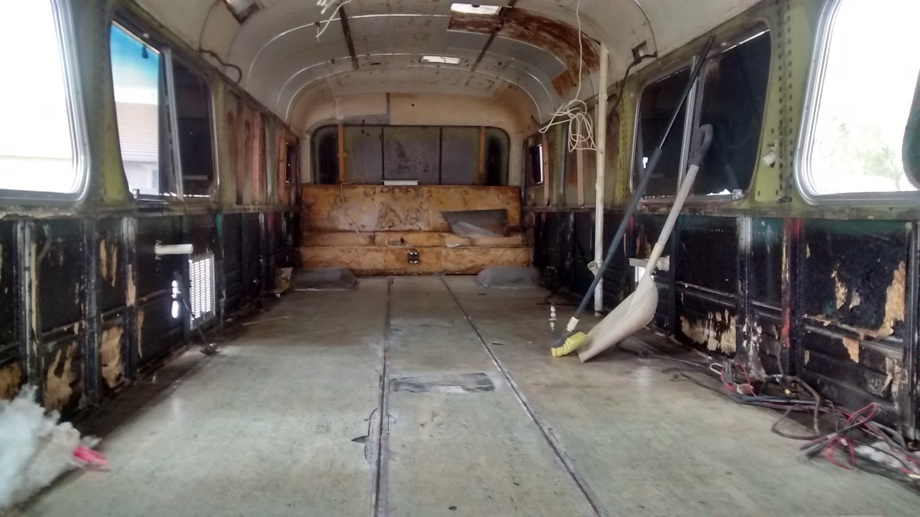 Our backs and hands were killing us, but it felt amazing to see the bus almost empty. Also, a huge discovery was made. The smell that we just couldn’t seem to clear out was finally gone. The rotten and moldy subfloor had been the culprit. I could finally breathe! Hallelujah!!

We were finally seeing the light at the end of this demo tunnel. We weren’t 100% done with the tearing things out, but we were so, so close.