We had always wondered what was in the first bay of our vintage bus behind some "secret" doors. When we first opened up the "secret" doors we were greeted by what seemed like an endless supply of pillow-type batting. In fact, every single nook and cranny of space in and around all the components, including up into the vents that open into the inside of the bus, was stuffed with it. We filled six or seven lawn-sized bags with the batting! 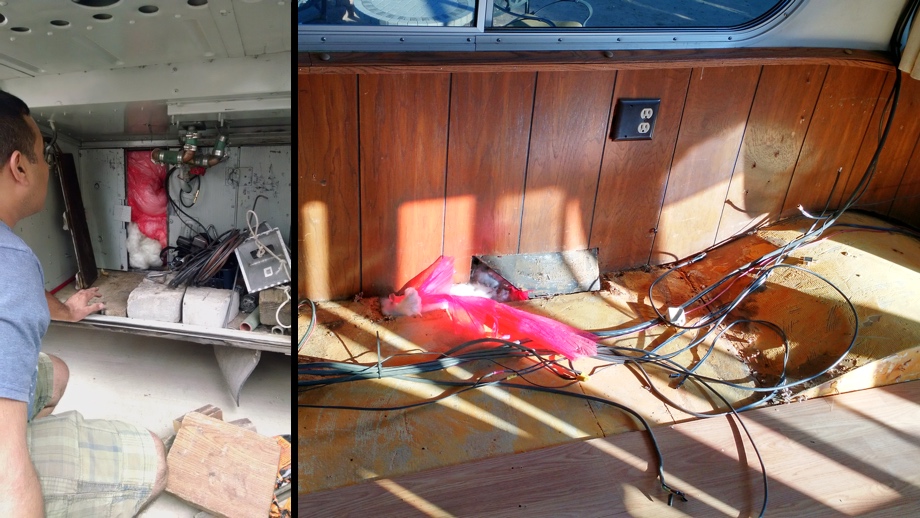 Once all this was removed we could finally see what was in there. The original factory A/C condenser and the heater core were in there. They were huge and, in their day, probably worked great. However, at some point in the life of this bus, many parts of it had been removed (the easy parts anyway). The supplemental water pump, one of the blower fan assemblies, and a bunch of wires and switches were all gone. It probably hadn't been functional since the late '70's. 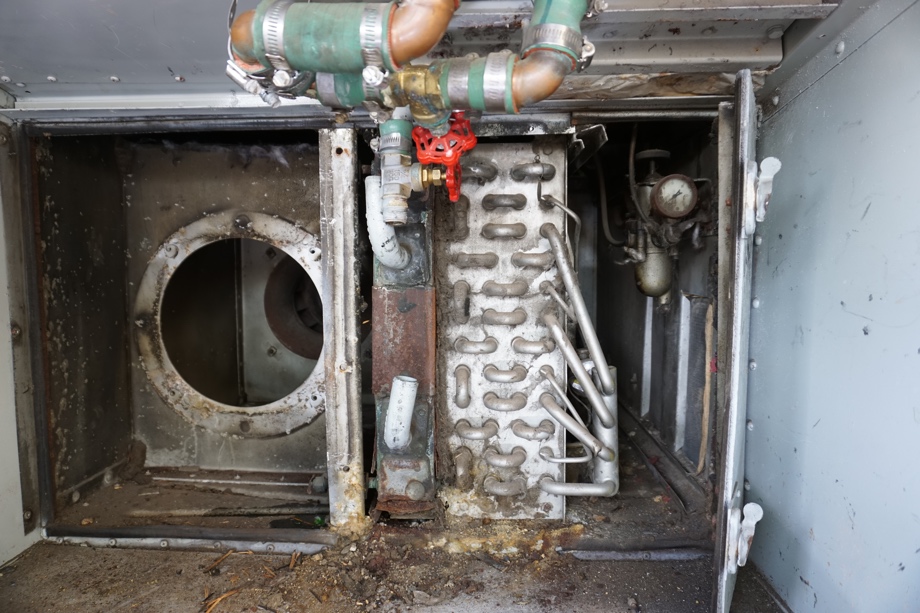 We decided that we could make much better use of this large space by removing all of it. We had one concern that we wanted to check on first before we started ripping it out. Were there any high-pressure lines connected to all of this? So, we researched to see if we could find this information on any old threads on some bus forums. Nothing. Next stop was some of our favorite bus Facebook groups. We asked if anyone knew if there were high-pressure lines there. While we didn't get any response to that specific question, we did get a few replies that suggested we try to save the system and replace the pump. Normally, we would heed the advice of these busnuts that have years and decades of experience. But, in this case, we made the executive decision to run the opposite direction. This system was pretty far gone.

Well, we should have realized why we didn't get much response specific to removing all of this system. Most sane people probably would have just said, "space, schmace...who needs more space?" And then proceeded to just close the bay door never to bother with it again. Because this job WORE US OUT. Well, not us, just Juan.

It was hard!! Rusty bolts, of course! So more grinding, overhead, on his back, crammed into a tiny, tight space, sparks and metal and 50+ years of gunk flying down on him. For hours...days! Sawzall, vice grips, multiple grinding wheels, and brute strength...and finally after a couple of weekends worth of work, Juan finally got it all out! 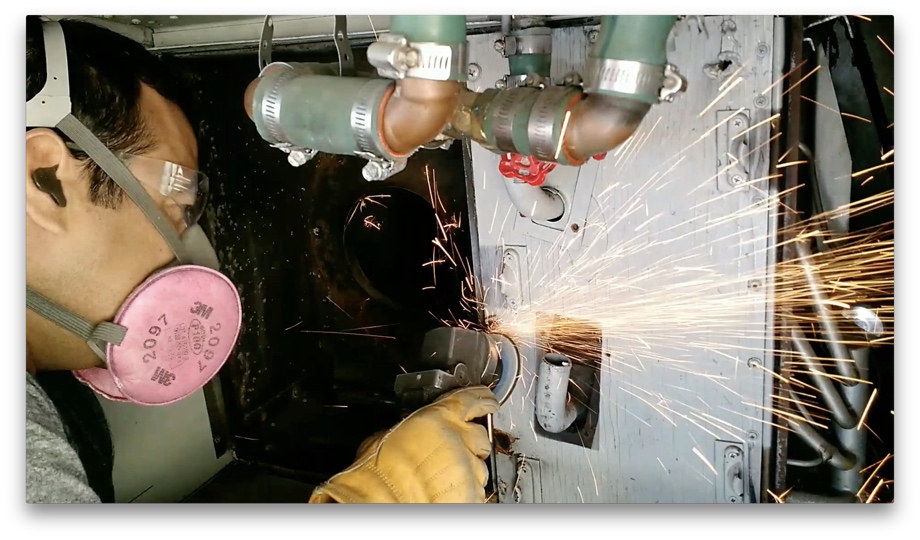 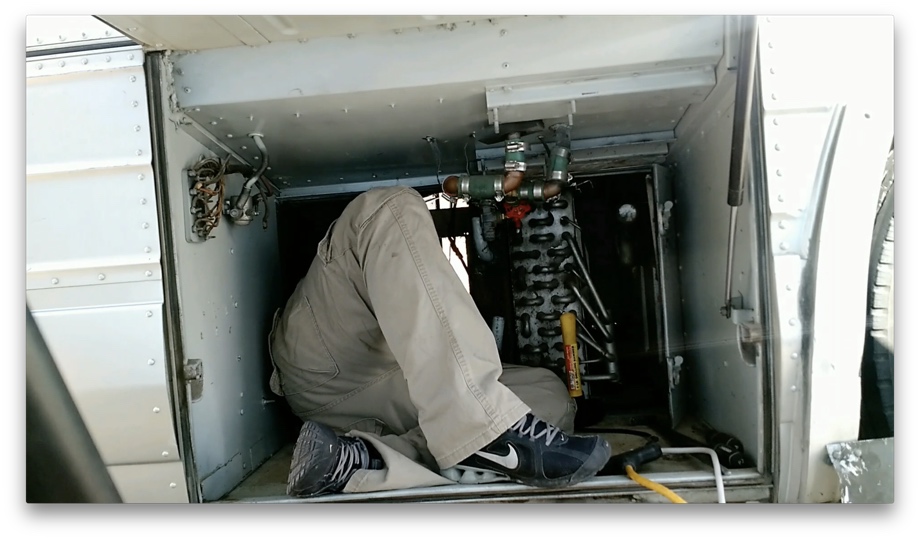 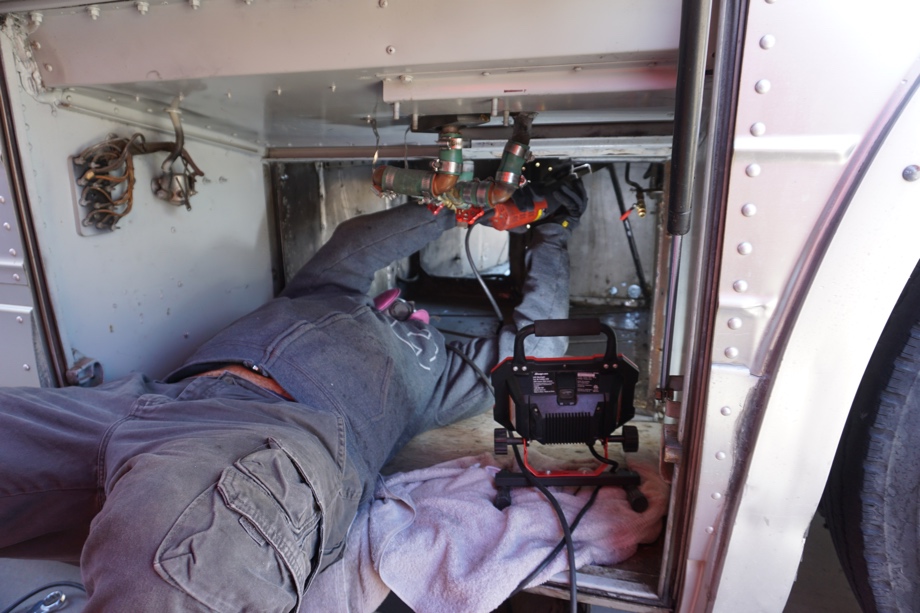 So, was it worth it? YES! We reclaimed so much wasted space. There is still a lot of clean-up work to do, but eventually, our entire electrical system will be housed in there. 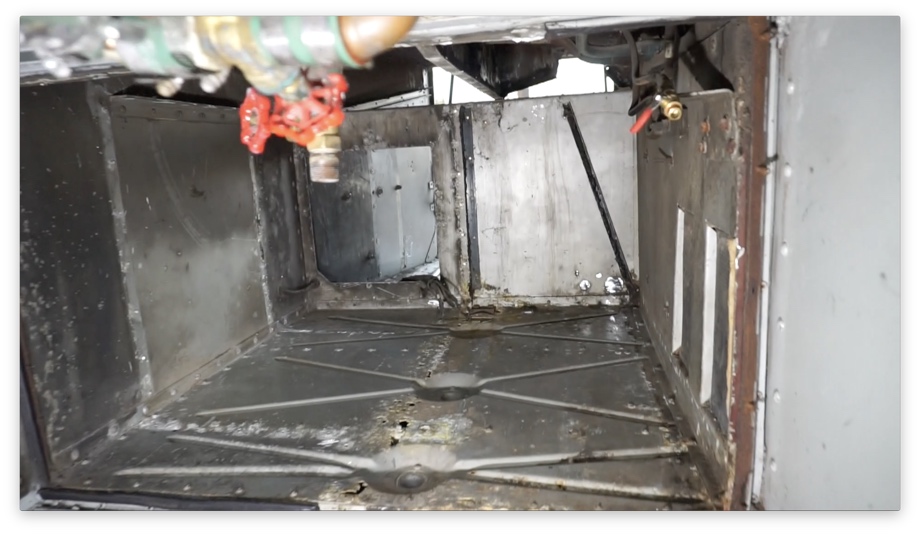 And, were there any high-pressure lines in there? Ugh...yep! One. When we finished the whole job, and started the bus, ready to drive it back to storage, the bus wouldn't build pressure. We quickly found the line hissing at us. One fast trip to Home Depot plus one ball valve to cap that line, and we were back in business.