Back in 2015 when we first had the idea to start traveling full-time, our main inspiration was to visit as many historic sites as possible to enhance our children’s education. That vision has grown and expanded in the years since, but historic sites have remained a top priority. What better place to really start our adventures than at one of the most significant locations in American history. Gettysburg, Pennsylvania. 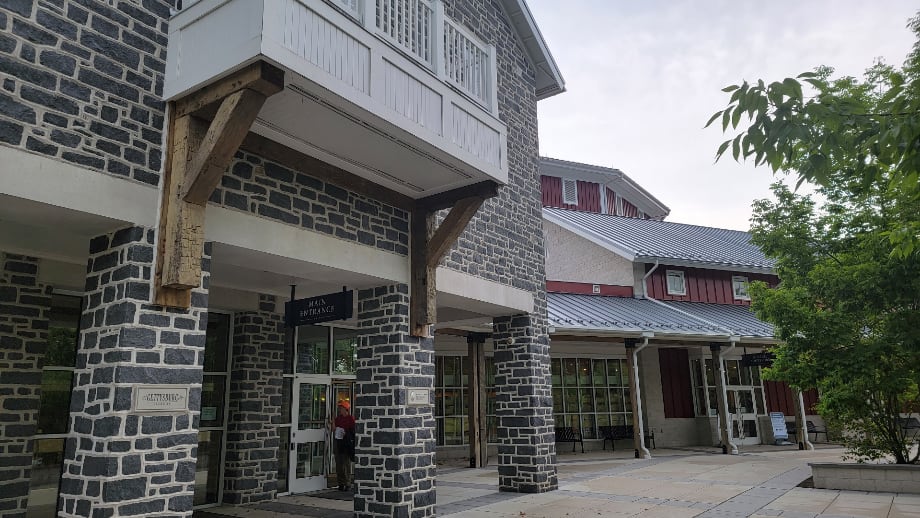 Instantly, we were brought into the landscape of the quaint farming town that became the site of a gruesome battle that changed the trajectory of the American Civil War. We started with the film “A New Birth of Freedom” narrated by Morgan Freeman. It was amazing! That movie alone helped us have a good overview of the battle and its place in history, and we had not even stepped outside of the visitor’s center yet. Next, we went to the Cyclorama. I have a hard time putting this experience into words. A 19th-century artist painted a GIGANTIC oil painting depicting Pickett’s Charge - the final charge of the Battle of Gettysburg. Then, it was wrapped in a circle surrounding the audience. Lights and sound effects were added, as well as a “stage” (for lack of a better word), bringing the painting 3D closer to you. Then, the events of Pickett’s Charge are narrated while the painting comes to life. Truly incredible! 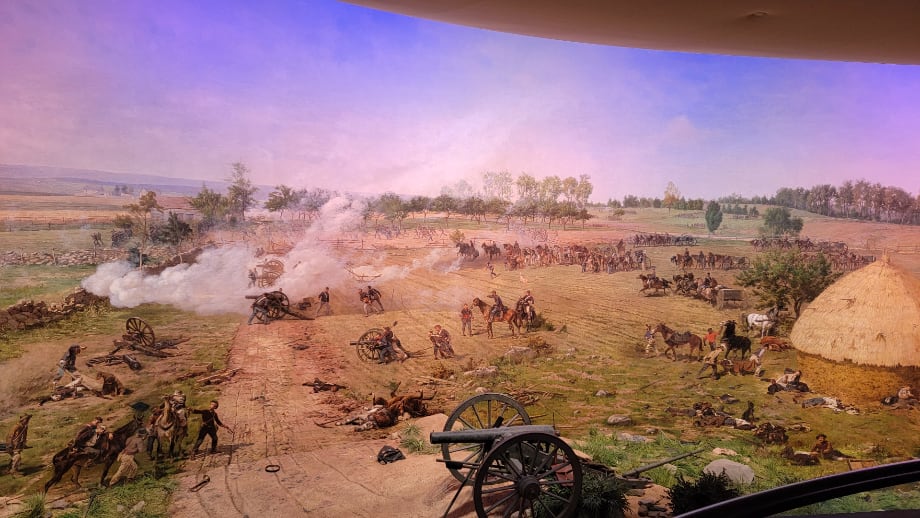 I had read many blog posts about how to do Gettysburg with kids. One suggestion that I read was to go tour the battlefield after the movie and cyclorama, but before seeing the museum. I wholeheartedly agree with that suggestion. The artifacts from the museum made so much more sense once we had seen and experienced the battlefield and town.

There are several options for touring the battlefield. You can do a self-guided audio driving tour. You can tour via bicycle or even Segway. You can do a bus tour. Or you can do a private guided tour. We decided to do the private tour. It was 100% worth it! Our guide, Jim, was absolutely incredible. We drove in our car and he drove in his own car. We followed him, stopping at different points along the way. While driving, we had him on his cell phone over the speakers in our car so we could all hear as he narrated the places we were seeing as we drove through town. When we stopped and got out of the car in multiple locations throughout the town and battlefield, he brought the battle to life in a way that still makes me emotional today. We not only learned about the lay of the land and the generals and the military strategies, but we learned what the civilians went through and the personal stories of individuals on the battlefield. He transported us all there. We could truly envision what happened on those three July days in 1863. It was a gift. Jim is a gifted storyteller, and I cannot recommend this type of tour highly enough. 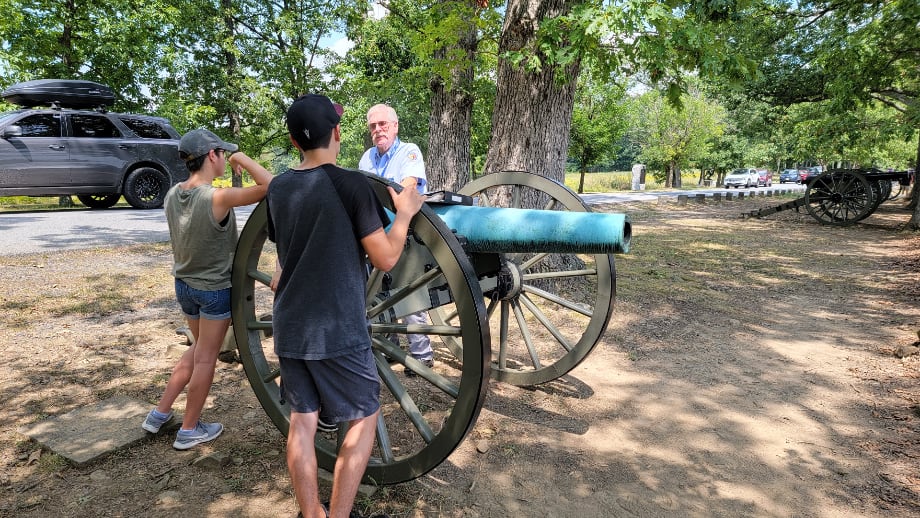 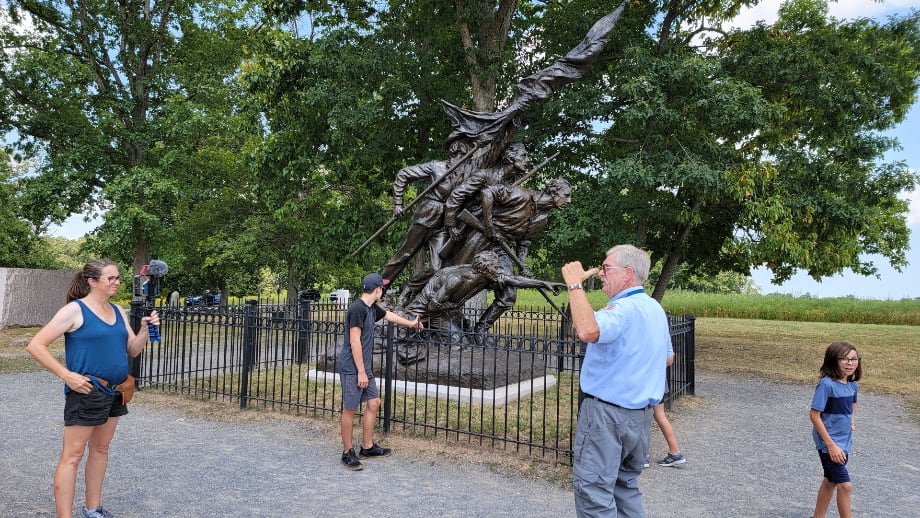 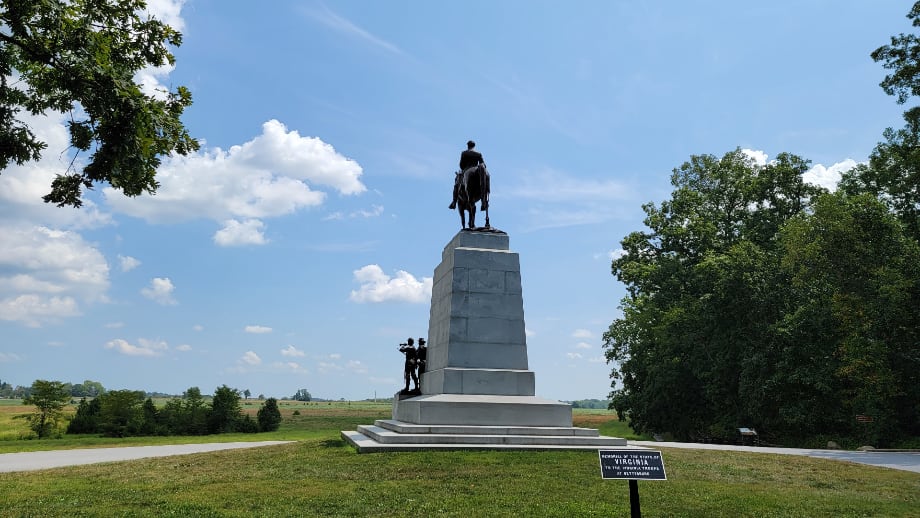 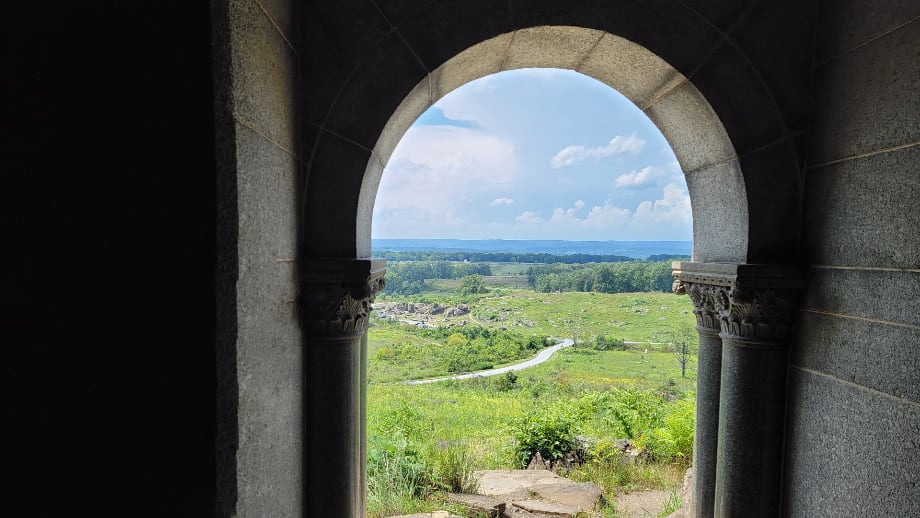 After we were finished with the tour, we made our way back to the visitor’s center and spent about an hour or so in the museum. While we could have spent much longer there, we were all certainly tired after a long, hot day. The museum is excellent and like the blogpost suggestion I had read, the museum made so much more sense once we had all the context of the tour.

That night, we stayed at a Harvest Host location on an alpaca farm. Our sweet hosts toured us around their farm and taught us all about how they use the fleece to make and sell all kinds of products around the world. The next morning, they were hosting the local 4H club that is working with their alpacas to train them for shows. They kindly invited our kids to join in. They were able to help weigh the babies and then work on some fun obstacle training with the alpacas. What a special treat! 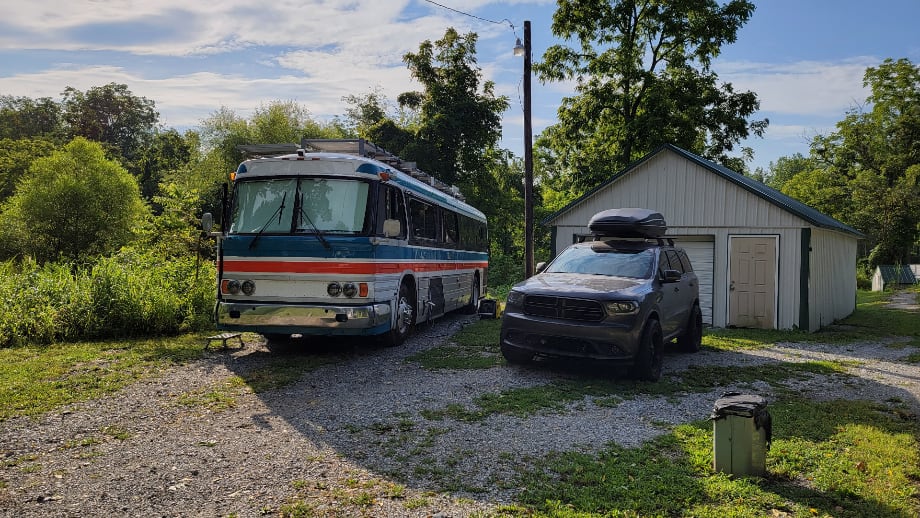 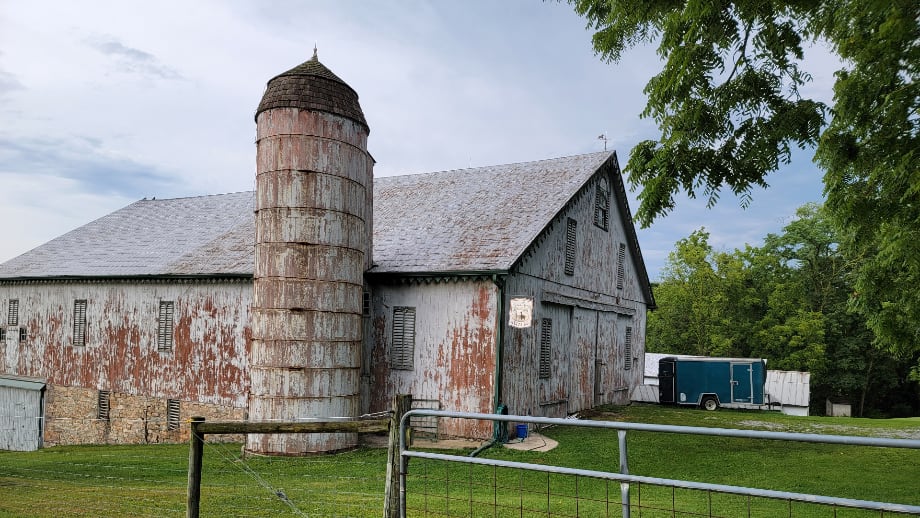 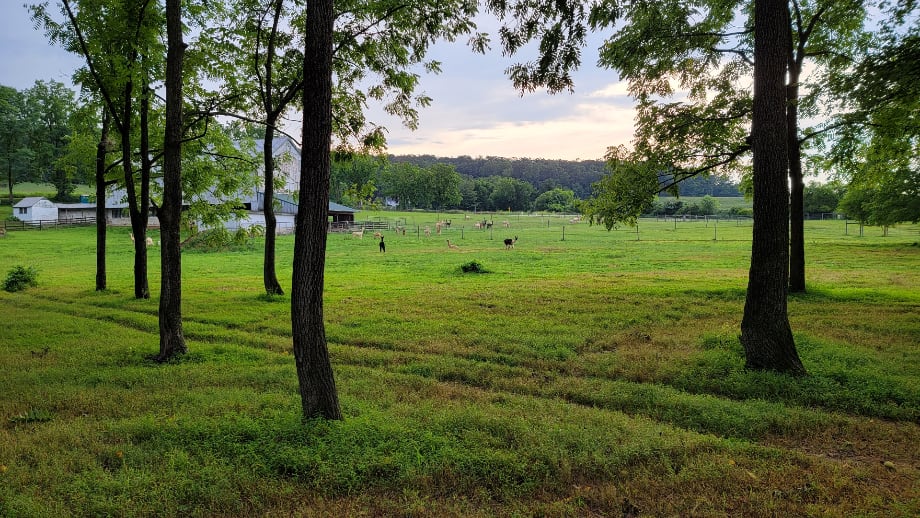 Following the alpaca fun, we made our way back into the town of Gettysburg. We visited a really neat place called the Shriver House Museum. This home that stood during the Battle of Gettysburg was purchased and renovated to be a living history museum depicting life for the civilians during the battle. During the renovation process, the history of the Shriver family who owned the home came to life. The tour tells the story of this specific family - a husband who went to war, a young wife and mother who was basically kicked out of her home by Confederate soldiers, and a home turned into a sniper’s den when bricks were removed in the attic. Shots were fired both out of and into those holes in the attic, ultimately killing the Confederate soldiers inside. It was a terrific tour to see life during the battle from a different point of view. 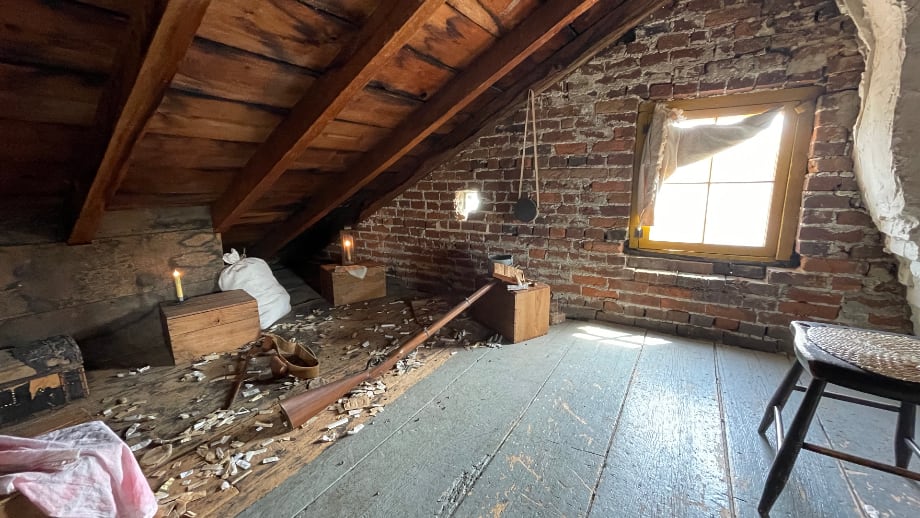 Finally, we went to the Gettysburg National Cemetery. We walked quietly as we remembered that this is just a portion of the many, many Americans who were lost that day. It is beautiful and emotional - a moving way to end our time in Gettysburg. 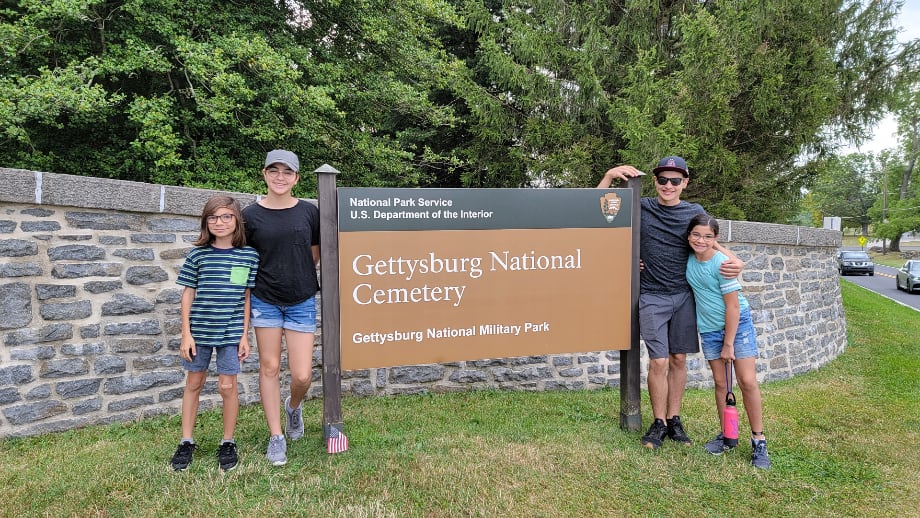 A visit to Gettysburg National Military Park should be on everyone’s shortlist of American history sites to visit. You can do it in a day if you hurry, two days for a more gentle pace, or maybe three days if you really want to dig into all the town has to offer.

link here Get 15% off your membership with this link.