Deciding on a battery for our bus turned out to be pretty involved. Our bus came with 4 deep-cycle lead acid batteries (only 2 of which were even hooked up) and a small 750-watt inverter that connected to literally 1 outlet inside. We spent hours researching chemistries, capacities, and configurations. Fortunately, with the power of the Internet, we had the advantage of having other folks do some research for us.
technomadia.com
boldandadventurous.com
wheelingit.us

At their core most batteries work the same way - they store electricity at some capacity (usually measured in Amp-Hours (Ah)) at some electric potential (measured in Volts V). To get the amount of energy stored in the battery we calculate the watt-hours (or Kilowatt Hours (kWh)) by multiplying the Volts by the rated Amp Hours.

Of course, the traditional route is to go with the tried-and-true deep-cycle lead-acid batteries. These come in various sizes, voltages, and configurations. But they are basically the same chemistry that most cars use to start the engine. There were several problems with this:

During our research, we ran across several RV families that were using Lithium batteries. These are more like the batteries that power your cell phone or laptop. The advantages of these batteries over lead acid are:

The main disadvantage of Lithium batteries is the high cost. High-end batteries can cost over $6000 for around 4 kWh capacity. Even more "reasonably" priced lithium cells (like the GBS Li-ion Iron Phosphate based cells) usually cost over $3000 for around 5 kWh. This can easily be 5x-7x the cost of lead-acid batteries of similar capacity.

We have tried to estimate how much power we would need while out on the road. We want to run mostly electric appliances (fridge, microwave/convection oven, and induction burners). We would also love to be able to run our A/C on our batteries. This has been a much-debated topic: gonewiththewynns.com and technomadia.com. We are still likely to use propane for hot water heating and supplemental heat.

A few napkin calculations based on how we live at home (running the refrigerator, cooking, charging devices, using lights, and running A/C) gave us a conservative estimate of around 10 kWh. Of course, with batteries more is almost always better if you have the room and weight capacity.

Before I continue, there is probably something I should disclose. I am a hacker ... I don't normally like to do things "the normal" way. I modify or tinker with almost anything I come into contact with. This might be a big reason why we decided on an old 1964 bus as opposed to a shiny new modern motorhome. Part of the fun is not knowing what you are doing and just figuring it out. With this in mind - I figured I could maybe hack my way into a less expensive way to get the battery we wanted.

About this time I came across a guy on YouTube who was building his own Powerwall - similar to the Tesla Powerwall but of his own creation using old used laptop battery cells. I played with this stuff for some time and even looked for old laptop batteries on Ebay and Craigslist. Well, it turns out that old laptop batteries are much harder to find now (probably because of videos like this and electric bike videos). Not only that, but it was going to take about 3000 cells or so to make a large enough battery. 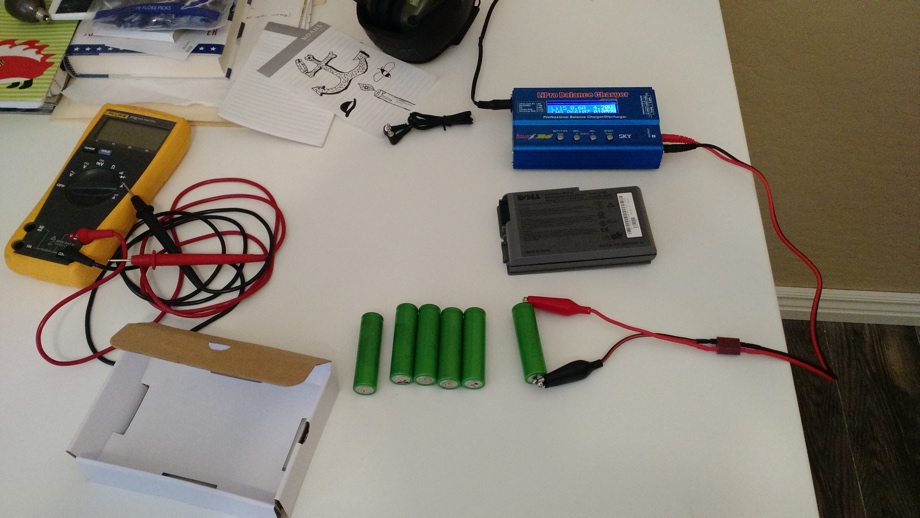 Not long after that, I discovered another guy who wanted to power his electric scooter with a bigger battery. His choice for the project was some cells out of a salvage Nissan Leaf. He has a great series of videos about the Nissan Leaf battery and how to reconfigure the modules. This really got me thinking about leveraging a Nissan Leaf pack for our RV House battery. The Nissan Leaf pack offers several advantages over the DIY Powerwall:

After a little more research, we decided this might present a pretty cool option. 1 Nissan Leaf battery pack has 24 kWh of power. Even playing it safe and only using 80% of the pack's power gives us over 19 kWh usable power. A little more research after that we discovered that the best packs to use are those in 2013 or later Nissan Leaf cars. These are known as the "Lizard" packs and are supposed to be much more durable under high heat conditions.

We started looking at salvage yards (fancy name for junk yards) online throughout the southwest. Since the battery is so heavy (about 650 pounds in its case), I fully expected to have to drive somewhere with a truck or trailer to pick it up. So we narrowed our search to places we could drive within a day or so. As luck would have it, we found one in California. I called and to my surprise, he did have it! Just out of curiosity, I asked about shipping. "Ummm... it's pretty heavy ... that's going to be about $150.00". I couldn't believe it - that is amazingly cheap to ship a 650 pound, awkwardly sized parcel. Well, that was mostly correct. It's actually $150 to a commercial establishment with a loading ramp. I happen to live in a house. That was going to push the shipping price closer to $500.00. Hmm ... what can I do? "Well ..." Chris said, "We could just ship it to a UPS freight center ..." BRILLIANT! Chris regretted to inform me that there would also be a core charge: another $150.00. I faxed off my information (who still uses fax?!) and the battery was ours a few short days later.

Honestly, we would have a hard time buying lead acid batteries of a similar capacity for that much. For $3000 we could have bought 5 kWh of GBS Li-ion Iron Phosphate batteries. I know it's not an apples-to-apples comparison, but this is almost 5 times the capacity for less money.

The Nissan Leaf battery is also a different chemistry than the more "traditional" GBS or the high-end cells which use a chemistry called Iron Phosphate. The Nissan Leaf battery uses a chemistry called lithium manganate. This has some advantages and disadvantages. The Iron Phosphate packs are more "stable" under abuse. What this really means is they are less likely to catch fire if you run them outside their limits (by overcharging or undercharging them). The Iron Phosphate packs are also widely used - meaning there are more BMS options and configurations for these types of batteries. The advantage of the Nissan Leaf battery is energy density (other than the huge advantage of 1/5 the cost we already mentioned). The Nissan Leaf pack has more energy in less weight than the iron phosphate-based batteries: at 24 kWh this represents a weight savings of about 160 pounds (Total pack weight for the entire pack after you remove it from the metal 'shell' is about 400 pounds.)

So with my geeky-hacker side fully satisfied, I still had one problem left. The UPS freight people were kind enough to load the battery into the truck with a forklift. In all the excitement, I had not even considered how the heck was I going to get a 650 pound, awkwardly shaped metal box out of the truck without killing myself?

Wow! This was a chore! It took about an hour of wiggling it this way and that to finally get it down the motorcycle ramp and onto a moving dolly.

Next, I opened up the external shell. This was also a bit of a chore. Watch the video to see the process:

As we stated earlier, we are experimenting. Hopefully, it all works the way we think it will. If not there is always plan B (spend more money).