When we removed the wheel well covers, we discovered some holes that needed to be dealt with. Some of these holes were from rivets, but some were clearly spots that had rusted through. 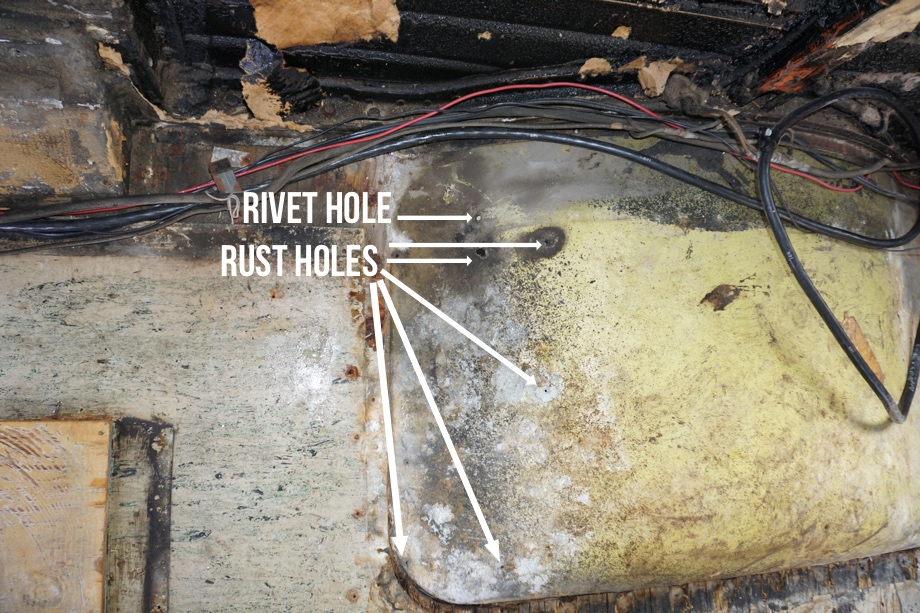 I guess after 50-plus years of water and debris being kicked up by the tires, even aluminum can eventually rust. Luckily, the holes were fairly small, but there were quite a few of them. Since Juan doesn’t have much experience with body repair work, we decided to ask for advice on some bus forums. Usually, we receive very helpful information, but this question was met with a few “interesting” suggestions on how to cover and repair the holes like using duct tape or carpet insulation. Um, yeah, no thanks. I mean, we know duct tape is a versatile tool to have, but we just didn’t think that would cut it. Ha!

Lucky for us, a sweet friend of ours owned his own auto body repair shop for many years. Gary generously offered to come take a look and give us some advice. He and another friend of ours stopped by and got the full tour of the bus. Gary took a look at the damage to the wheel wells, and, of course, he knew just what we should do. He suggested a product called Kitty Hair. 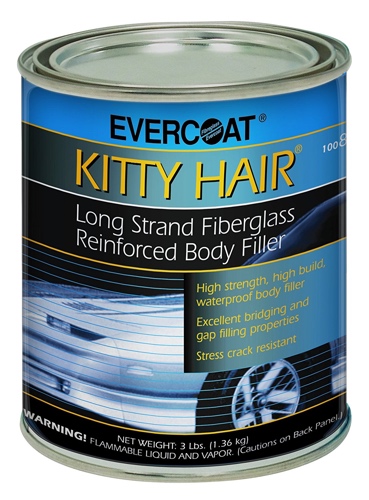 It’s a fiberglass body filler by Evercoat. Here’s what the description says on the website: “Best known for its bridging capabilities in rebuilding shattered fiberglass and for reinforcing torn or rusted areas of sheet metal. Formulated with long strands of chopped fiberglass. Double the strength of standard fillers. Waterproof. Rustproof.” Sounds good to us.

We didn’t want to wait around for Amazon to deliver it, so we hunted it down locally at an auto paint supply shop that was open that day. That night we got to work. The first step was to make sure we located each and every single spot that needed to be repaired. We took advantage of the dark night and shined a work light up under each wheel well. That lit up all the holes inside the bus that needed to be fixed. 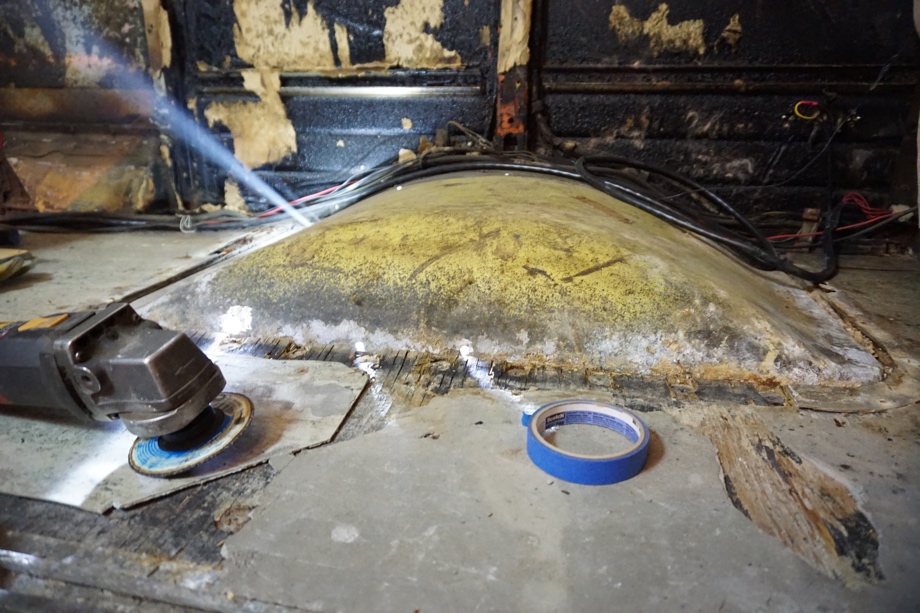 Juan was inside the bus, and as each hole was lit up, he used his grinder to prepare the surface of the metal. He was sure to remove any surface rust around the hole and take it down to the bare metal. Then, I placed a small piece of duct tape under the wheel well where each hole was. This provided a surface for the Kitty Hair to grip to while it cured and sealed the hole.

The next morning, the first thing we did was clean each spot really well. We used a product called Rustoleum Wax and Tar Remover to remove as much dirt, grease, and grime as possible from an old bus. Oh man, those wheel wells were so, so filthy. We would have been there all day if we were trying to clean it to perfection. We just needed the Kitty Hair to stick. So, we called it “clean enough”, and moved on.

The Kitty Hair looks like a giant hair-ball, hence the name. Beware, it stinks pretty bad, so if you ever use this product, be sure to open windows. First, I took a small amount out of the can and put it on a mixing board. Next, I added a small amount of the bright blue hardener that comes in a separate tube. The ratio is about 1 part hardener to 50 parts Kitty Hair. I eyeballed it. Then, I just mixed it up, working quickly, until the blue color was evenly distributed and mixed through. I only mixed up a small portion at a time because it started to set up within about 5 minutes. I used a small plastic scraper to put a small amount of the mixture on a hole and spread it on fairly thin until it covered the hole. After covering a few holes, I would mix up a new batch and keep going. It didn’t take long, and all the holes were covered.

The Kitty Hair was hard within about 15 minutes. If you were using this in a spot that needed to be painted, you could then sand it down and paint. For our project, however, we didn’t need to sand it down. These wheel wells will eventually be insulated, and a box will be built over each one, so none of this will ever be seen.

We were really happy with how the Kitty Hair worked and how easy it was to work with. Thanks, Gary!

One final note: We intend on having the underside of the wheel wells sprayed with Line-X truck bed liner. That will prevent any future damage from the tires kicking up water. We will be sure to document that when we have it done.