We keep plugging along on the demo, weekend warrior-ing it every Saturday and Sunday. We would love to be able to keep the bus at our house so we could work on it during the weeknights after work and school, but that’s just not an option, unfortunately. Darn HOA. So, we power through as much as possible every weekend.

Last time we updated you, we had finished pulling down the rest of the “mouse fur” ceiling panels and removing most of the cabinets. The only structures remaining were the bathroom and the refrigerator cabinet. We decided this was the weekend for the bathroom demo.

Saturday morning, Juan squeezed himself into the teeny bathroom and started removing the sink, vanity cabinet, and toilet. 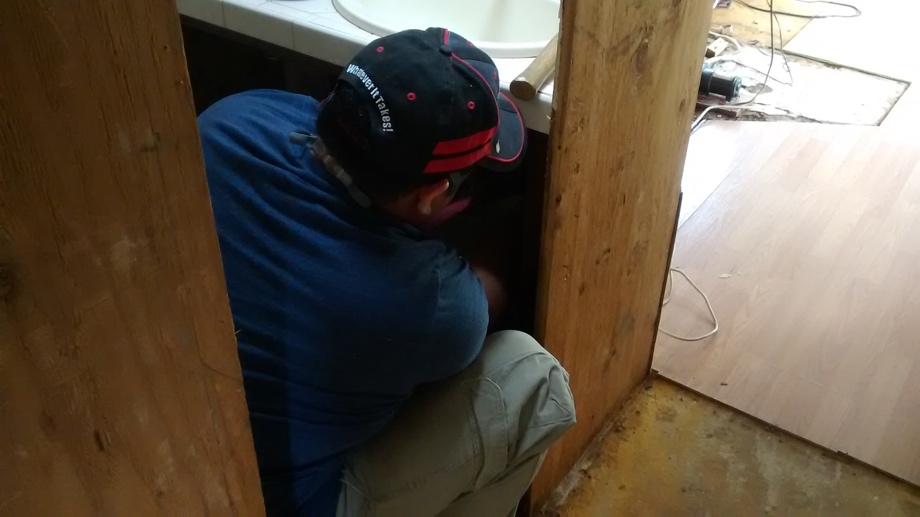 First, we had to just clean out the cupboard and that's when we found a few interesting things including three nail files and a used fake nail. I don't know why the fake nail grosses me out, but it totally does. Yuck! 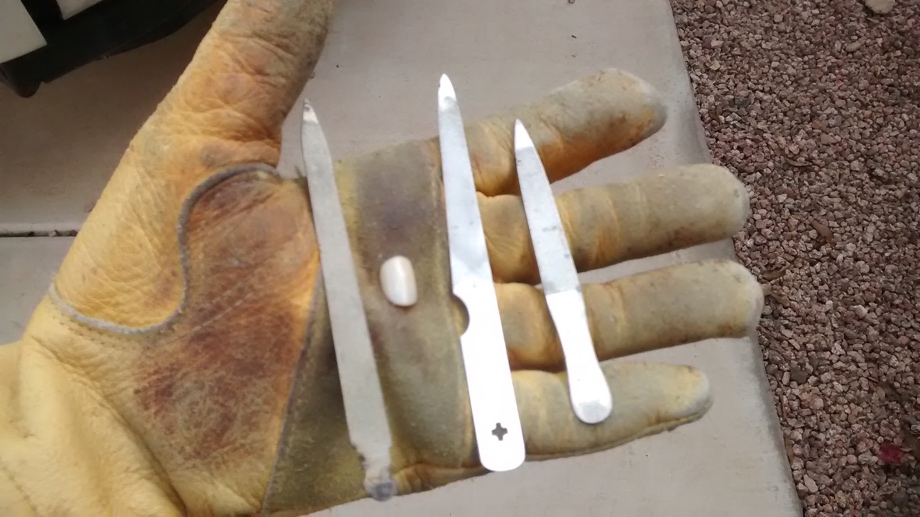 The countertop and backsplash tile was a bit of a pain to get out, but nothing a little crowbar and mallet couldn’t take care of. 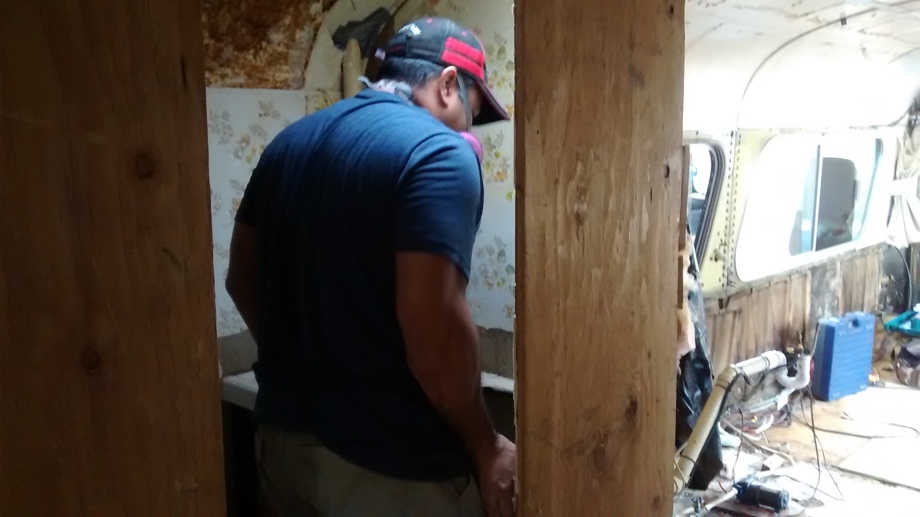 When Juan got to the water lines and drains under the sink, it was obvious that at some point there had been some major leaking in there. The copper pipes were green in places. The lines came into the bathroom from the kitchen, so we had to start pulling things apart out there first. But, first things first - we had to drain the hot water tank. This took a little longer than we were expecting (that’s a running theme in this renovation), but we finally got all the water out. Finally, all the crazy pipes in the kitchen got ripped out, which then led to getting the bathroom lines out as well.

As part of the plumbing removal, we took out the water pump and the water heater. 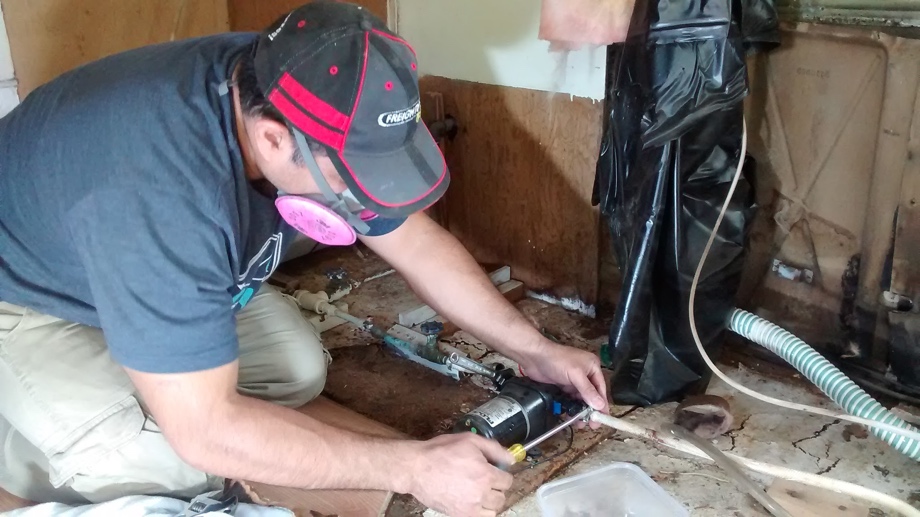 At first, we couldn't get the outer vent panel off in order to pull out the water heater because there was a very bent screw holding it on. 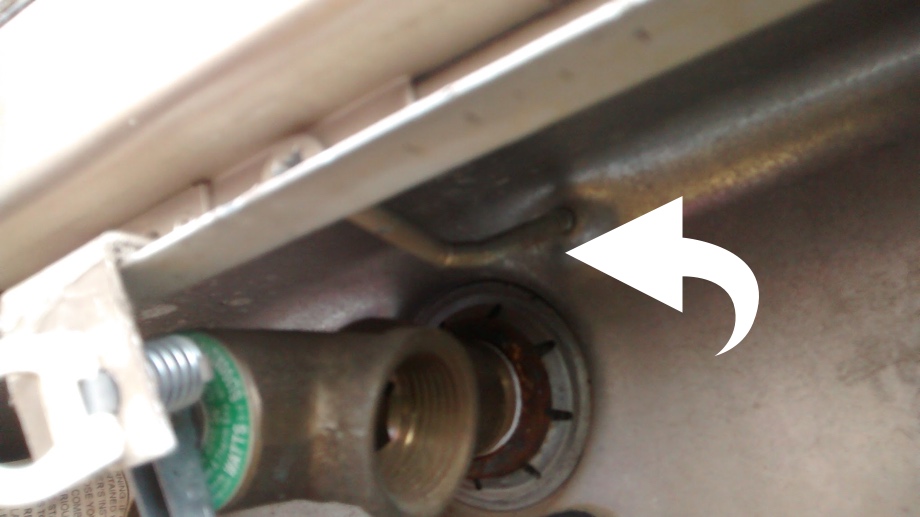 How were we going to get that screw out? Enter, bolt cutters! Now, we’re getting somewhere. The kitchen was finally empty! One little hitch, after removing the water heater, there was nothing for the outer vent panel to attach to in order to stay in place. We took some of our scrap wood and just stuck that inside the bus and screwed the panel into that temporarily. 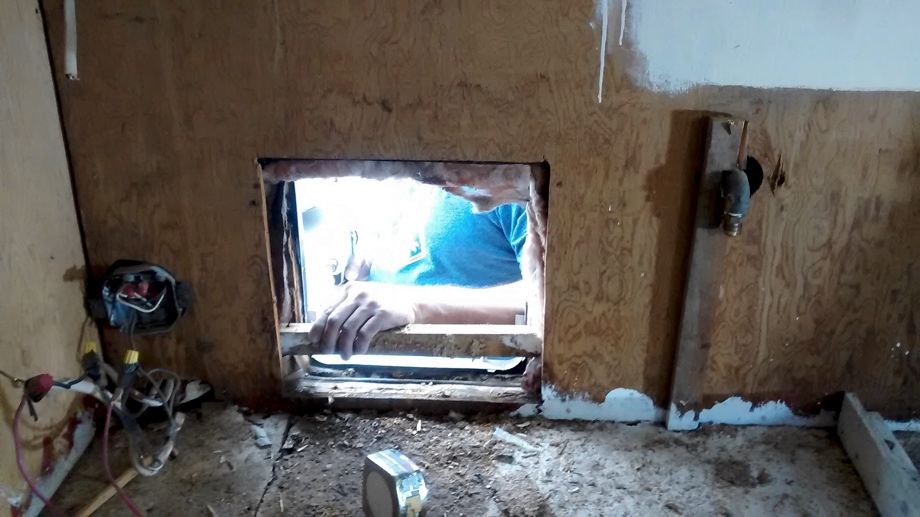 We have decided that we are going to replace that water heater with a tankless water heater which we will install down in our water bay. That will allow us more kitchen storage and more than six gallons of hot water for the six of us to shower. We decided to take some measurements of where that vent is located because we were trying to figure out if we could somehow configure the kitchen cabinets to make a kitty litter box cupboard that would utilize that vent. We have since changed that plan, so we may need to replace that vent with a solid panel.

Sunday rolled around and we had to start dealing with the walls. We originally thought we would try to work with the existing walls for the bathroom. They were in fairly decent shape, surprisingly. However, the hallway wall next to the vanity covered up part of the fan on the ceiling. Let’s just add that to the list of “things that make us go hmmmmm?” in this bus. We knew that we wanted to replace all the fans in the bus with more efficient and effective fans, so that wall would have to come down. When we put the walls back up, we would extend the bathroom a couple inches. Well, since we needed to move that wall, that meant that all the rest of the bathroom walls would have to come down as well and get rebuilt. (spoiler alert: we ended up changing plans again later down the road and decided that we will not put up hallway walls. The bathroom will be open to the closet that was across the hallway and we will create pocket doors on both sides of that space, which will close it off from the kids' room in the back and the kitchen/living room in the front when necessary.)

Knocking down the walls proved to be a bit of a bear. First of all, SO MANY NAILS! Not just any nails, twist nails! Ugh! Second, it was like a puzzle getting all the different walls out. After taking down the first hallway wall fairly easily, we got stuck. The wall dividing the bathroom from the kitchen was pinned between the back wall to the kitchen that was covering a window and the back wall to the bathroom. So, we had to remove the kitchen wall first. 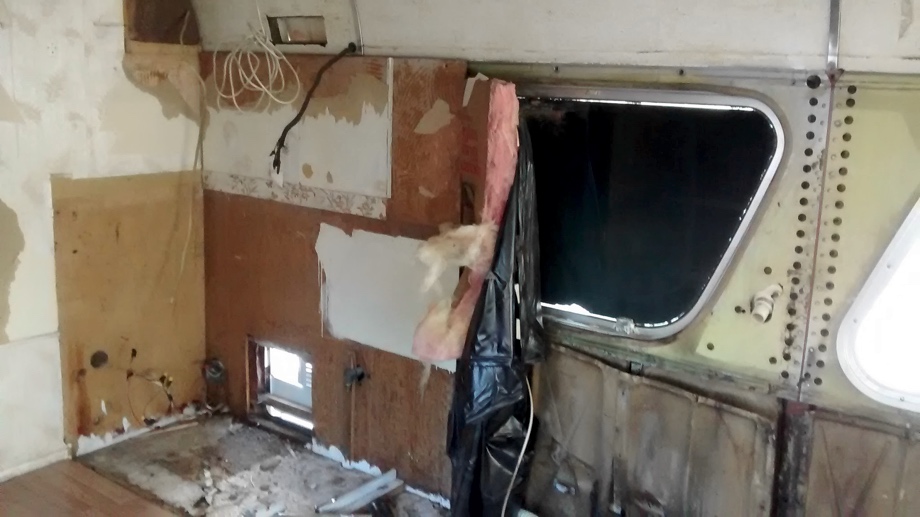 Lots of drilling and prying later, we got the kitchen wall out and were finally able to remove the dividing wall between the kitchen and bathroom.

Moving on to the other side of the bathroom, we got that side of the hallway wall out after ALL THE NAILS. Then, we pulled down the panels that made the entry to the shower. Then, we were stuck again. The dividing wall between the shower and the bedroom was stuck between the wheel well and the shower pan on the bottom. It was also stuck against a metal cylinder hanging down from the ceiling on the top. No amount of sledgehammering would make it budge. So, out came the shower pan, and then literally that wall just fell over. Awesome.

Finally, we got to the last walls - the back of the bathroom. There were some big giant bolts holding this wall up. When we finally got one stubborn one out, we discovered that at some point someone accidentally drilled into that bolt and broke off a drill bit right in it. 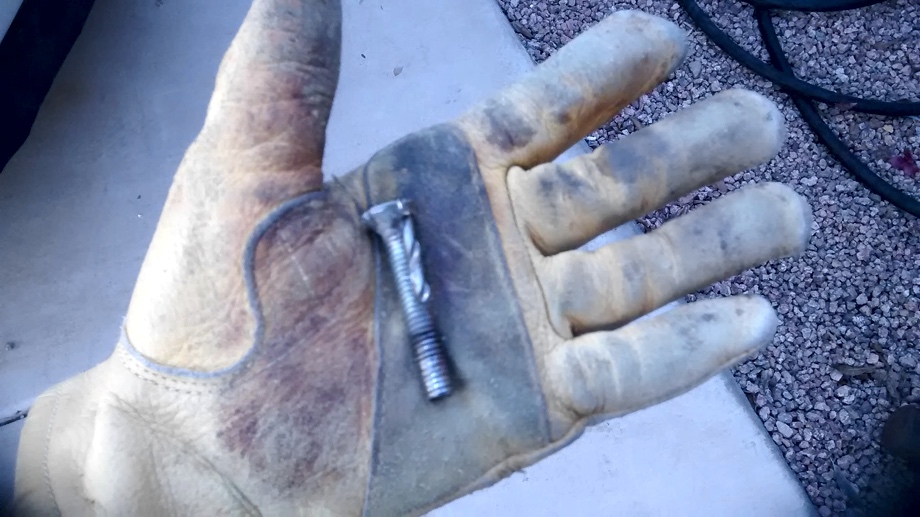 Man, that must have been a bad day for that guy. After that, we got those walls down, and the bathroom was gone. 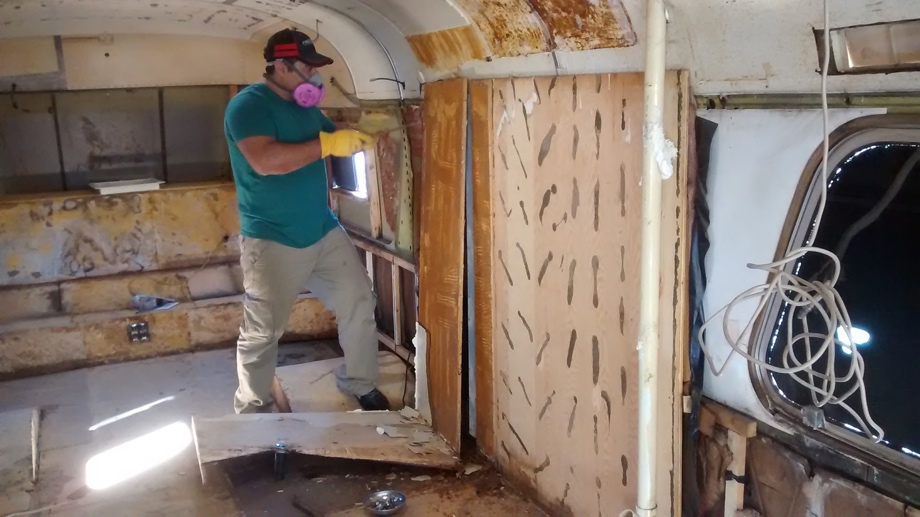 We saved the two wall panels that divided the rooms. We will use them as templates for the curve in the ceiling when we make new walls later. That will be a big help.

Finally, after lots of cleaning up, we decided to take out the waste tank in the storage bay. It was elevated on a stand that was bolted with very, very long bolts through the bottom of the bus. 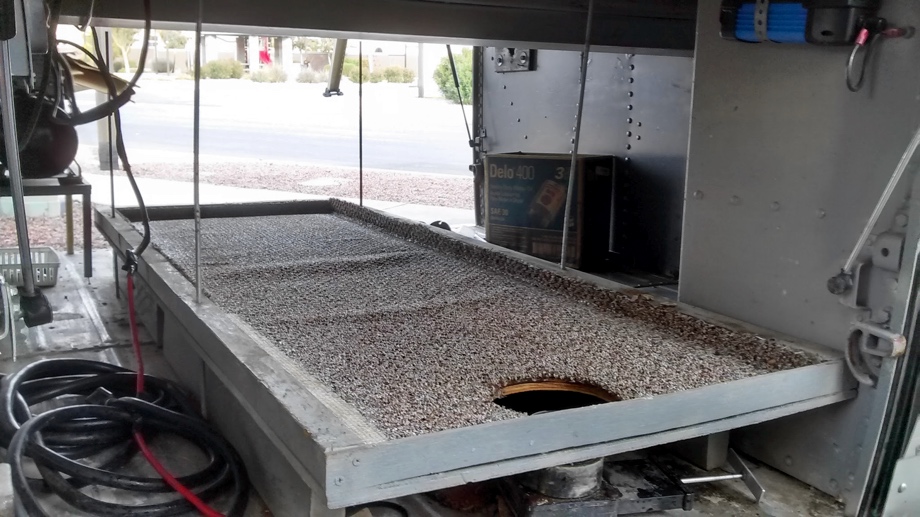 Once we finally removed all those bolts, we were able to pull out the tank. Here was where it got “fun”. We had already drained the tank, but we hadn’t flushed it out with the hose to make sure there weren’t any last “remnants”. That was a mistake. Because, as my poor, sweet husband pulled out this awkward 100 gallon tank, a little remaining “contents” ended up coming out. Poo on the shoes!! Fun times! Excuse me while I go throw up...be right back. I guess we can count that as our first black tank mishap and we aren't even close to being on the road yet.

While it didn’t end on the best note...well, maybe the funniest...it was a productive weekend. And, we could finally just admit it to ourselves. What started out as a “bus rehab” was officially a complete gut-job. Click here If you cannot see the video player.