After bringing the bus home and having a good look around, the first order of business was assessing all the systems and figuring out what was really in the bus. From discussions with the seller, we knew that the bus was bought from Greyhound in 1979 and converted to an RV sometime in the early 1980’s. The brown shag carpet stood as a testimony. At the time of our initial inspection, we were able to do limited testing on most of the systems: the engine and transmission operated very smoothly with no signs of smoke or hesitation, the generator started and ran the lights and A/C system with no problem. The propane system seemed to be in order - we were able to light the stove with no issues.

The first weekend, we decided to do a more thorough testing of the systems. All the electrical seemed to be working well, so we pulled out the four small house batteries and charged them up. 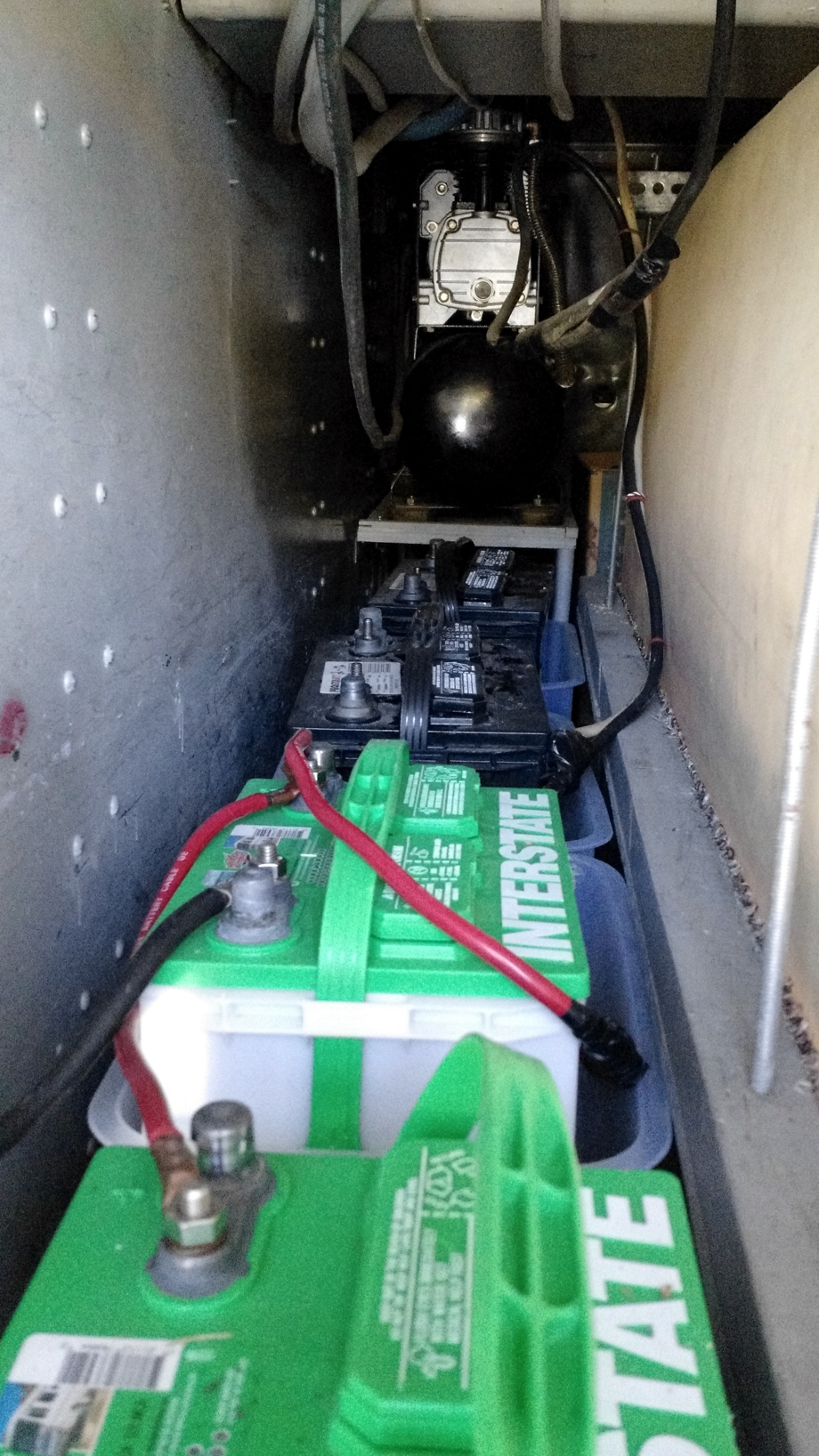 The bus came with 4 small house batteries. We have big plans for upgrading this (stay tuned).

We pulled out all the awnings. The large main one is fairly new and in good shape. Although it’s not our taste in terms of color (it is light brown fading to a dark brown), it will probably stay. The small ones over the smaller windows, however, will need new fabric. They are nearly threadbare in places. Thankfully, Juan’s mom is a professional seamstress and has an industrial sewing machine and will probably be able to help us make new ones.

All the water systems seemed to be in working order. We did find a leak from the shower down into one of the bays, however, it turns out the drain pipe just wasn’t seated properly. The big surprise was the size of the fresh water tank. During the inspection when we bought it, we couldn’t see the tank because of its placement under the kitchen cabinets. But, that should give you a clue - it was under the kitchen cabinets - ha! It’s only a 30 gallon water tank. I think the previous owners must not have boondocked (camping without water or electricity or sewer) for very many days at a time - and definitely not with six people like our family. A new huge fresh water tank repositioned in a bay is now on the list. The plumbing was crazy under the kitchen cabinets and basically made the cabinets useless for storage. The condition of the subfloor under the pipes in those cabinets indicates that there must have been some pretty significant leaks. It will all get redone. The grey/black tank is large at approximately 100 gallons. 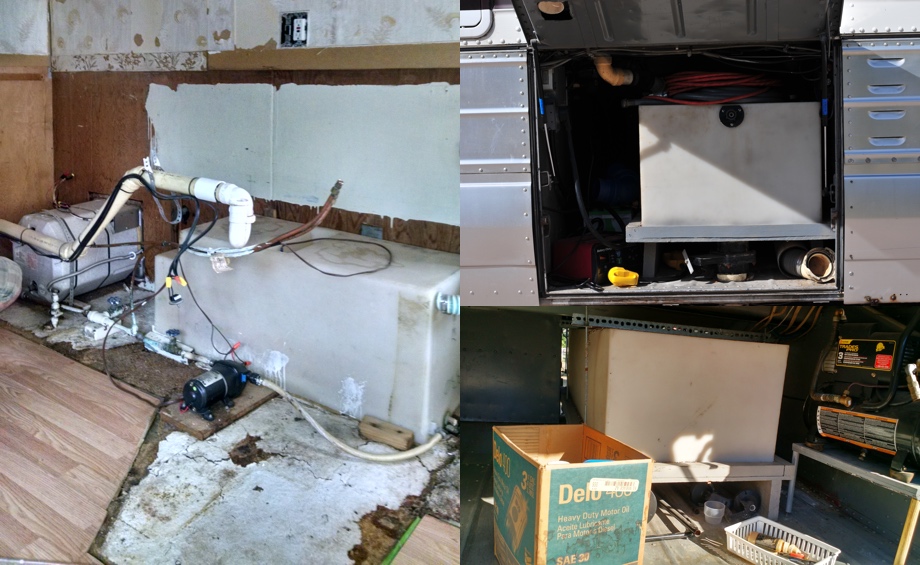 Crazy plumbing revealed post kitchen tear down. Not much room for storage with pipes, drains, tanks, and pumps running right through everything. Front and back of the grey/black tank shown.

The second weekend, the kids really wanted to help, so we put them to work taking out anything that was easily removable - the little table and chairs, decor, hooks, random things left in drawers and cupboards, etc. Ahhh, just doing that little bit made it feel better. Then, we started testing all of the exterior lights. A few marker lights need new bulbs. As we were testing turn signals, we had our first “uh-oh” moment. Juan was outside looking at all the lights while I was sitting in the driver’s seat turning things on and off as he requested. I turned on the left turn signal, but when I turned it off, the light wouldn’t stop blinking. “Hmmm, that’s strange,” I said. “Let’s try that again.” Nope, still not turning off. “Honey, I’m smelling something burning up here...Juan! GET IN HERE! The steering column is starting to smoke!!!” He came in the bus, sat down in the driver’s chair, and I stood by with a fire extinguisher because WHAT HAVE WE GOTTEN OURSELVES INTO?? Well, he fiddled with it for a minute, and the light stopped blinking and the smoking stopped. Fun times! We are not exactly sure what happened. There is clearly a short of some kind in the column. Another TO-DO item for the list. 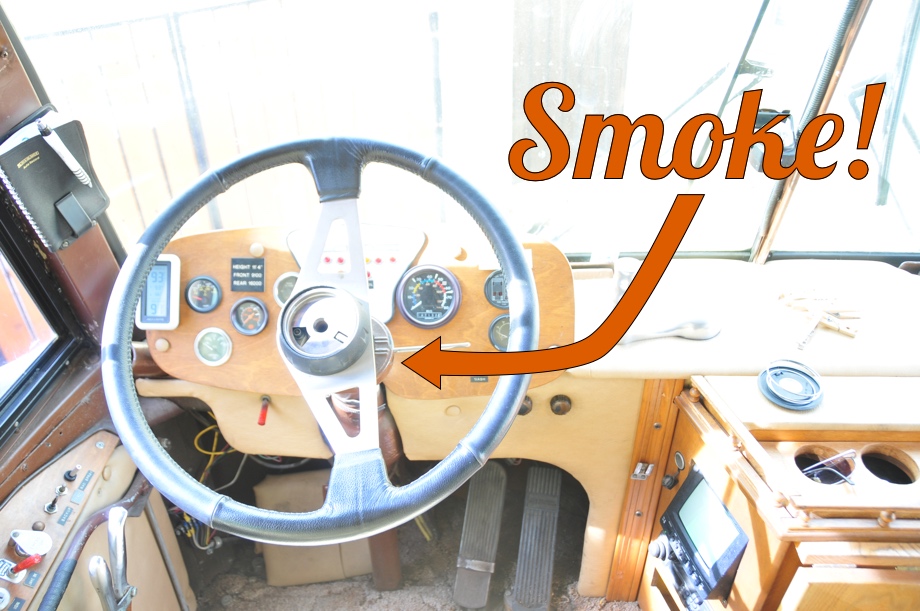 The front door is a bit messed up - not sure how else to put it. First of all, it has a standard household deadbolt on it and a household door handle. But, the main two problems are that the door isn’t aligned properly, and it looks as though someone tried to pry the door open at some point, so the metal and the doorjamb are bent. This is one of those things that we may need to hire out to get fixed properly, so we took it to a local big rig/bus body and paint shop to get a consultation. The owner of the shop was very nice and knowledgeable and said he would probably send it to a different shop for the body work, but that we should try to do the initial prep work ourselves to save some money. The funny part was that he loved the previous owner’s cowboy hat that was still hanging in the hat holder by the driver’s seat. When he asked Juan about it, Juan told him that the owner had just left it in there. He kept commenting how it was such a nice hat. Now, he is a cowboy himself and was already wearing his own cowboy hat, boots, etc. Juan told him that he could have the hat if he wanted it. He tried it on and it was a perfect fit. He was thrilled and told Juan that it would be payment for the consultation! Ha! Awesome! Love these old hometown cowboys around here. As we drove away, he was still wearing the hat, waving goodbye to us. 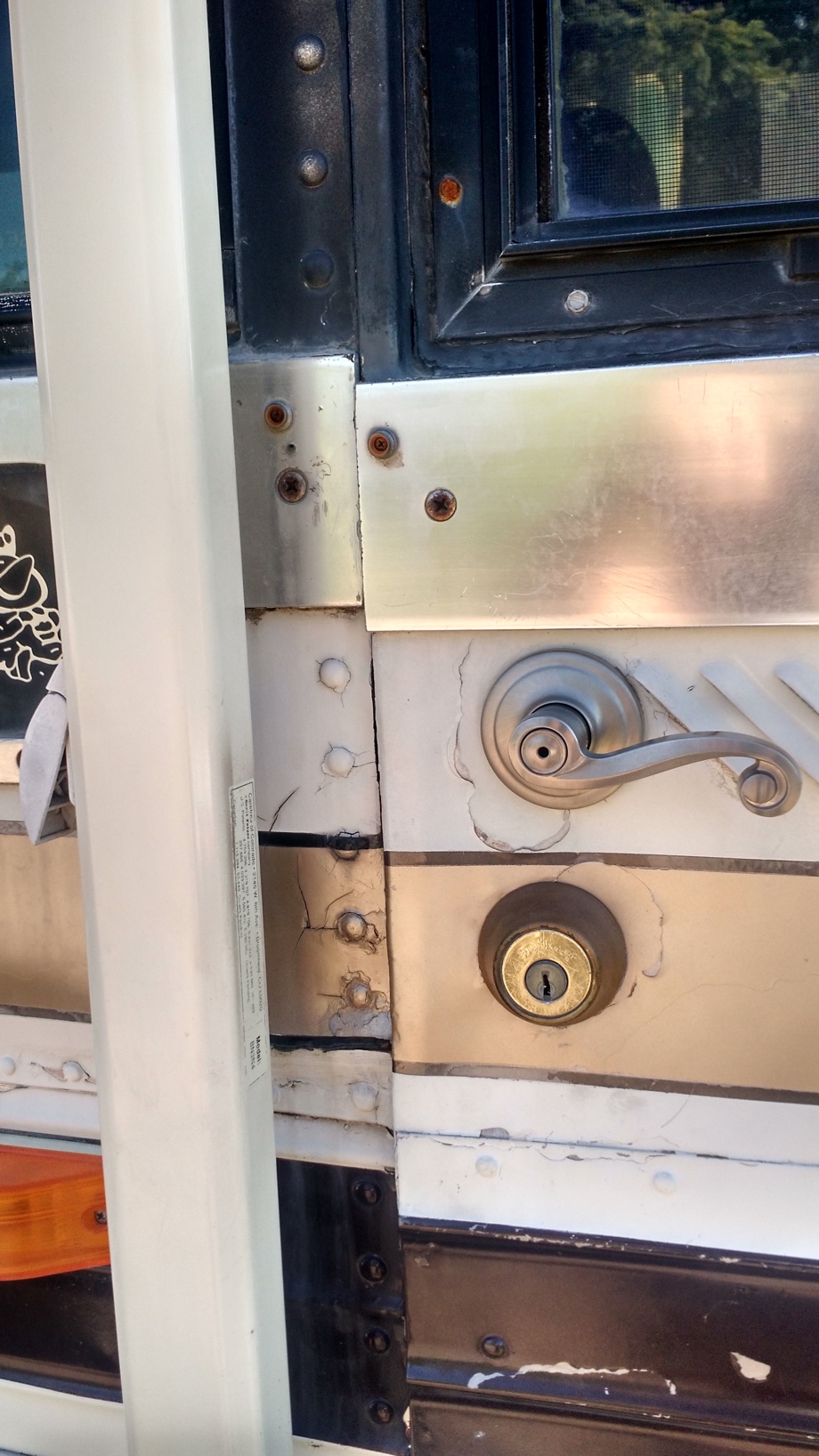 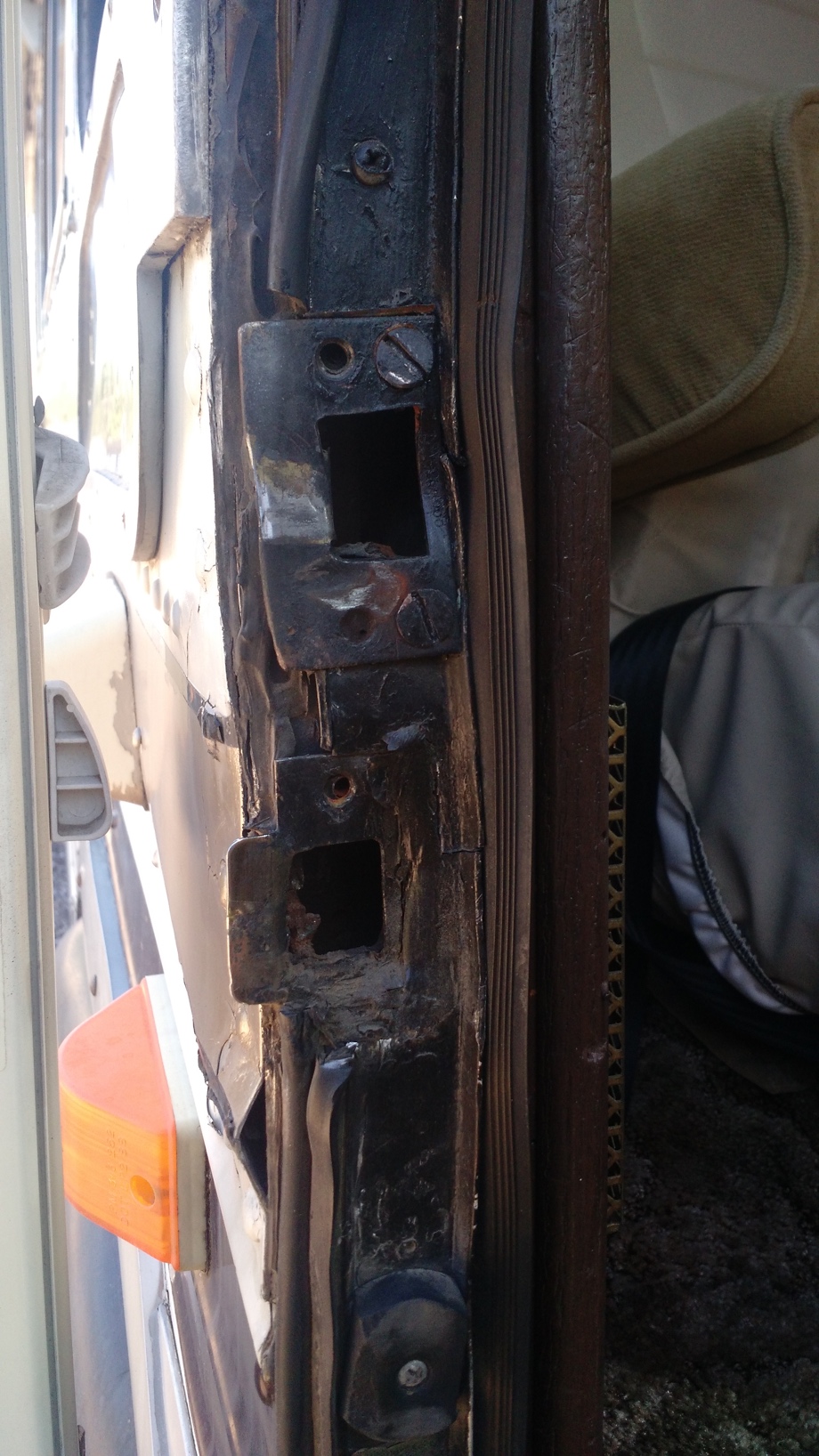 The third weekend, we started taking the door and dash panels off to get access to all the door mechanisms. That took a little while since we didn’t know how the puzzle of all those panels fit together. We finally got them all off. We have come to a bit of a stand still on the door as we call around to some different body shops to see who has the capability and availability to work on it. But, in the meantime, we started the demo process. And, that’s when we really started getting a vision for what this renovation might entail.