After getting the A/C power mostly squared away and tested, it was time to tackle the 12V DC "house" power side of things. Most modern motorhomes actually have three discrete electrical systems powered by two separate sets of batteries. The first electrical system is to power the vehicle part of the RV. Much like a car, it is often 12 Volts with batteries that are designed to provide a high output but are not usually "deep cycle". The second set of batteries are usually "deep cycle" and are meant to power both the 120 Volt AC household power like air conditioners, microwaves, and outlets as well as the 12 Volt DC house systems such as lights, pumps, stereos, etc. This last system is what we are dealing with in this post.

If you have been following along with our build, you know that our house batteries are far from the traditional RV system. While most traditional RVs run their house power from 12V batteries, our house batteries run at 48V (actually closer to 55V). There are many reasons why we went this route which you can read more about here (more details here). A quick version is that it increases efficiency. 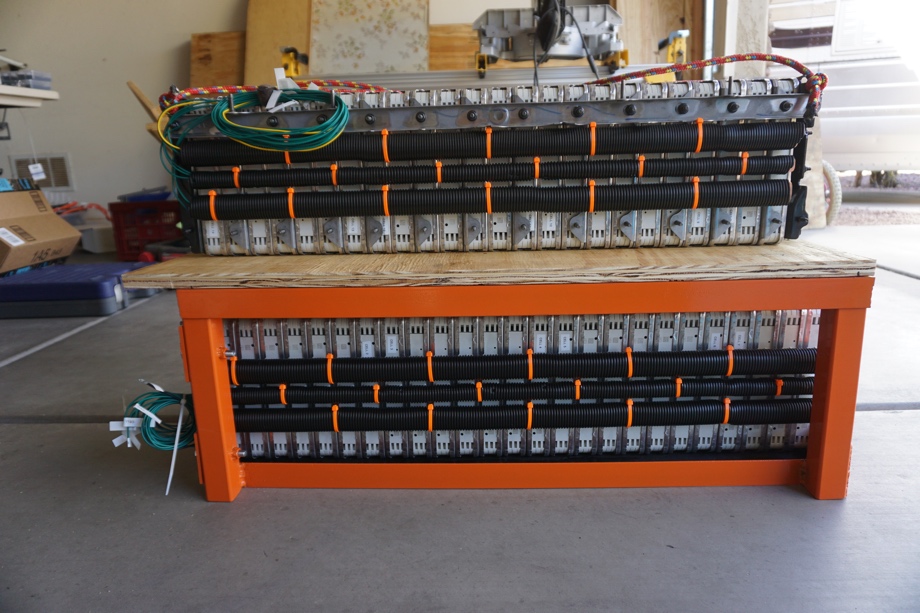 While stationary off-grid systems have been increasingly trending toward 48 Volts, increasing the availability of things like inverters, charge controllers and BMS units, one problem is that most RV DC powered devices are 12V. We needed to find a way to get the 48V DC coming out of the batteries down to 12V DC in order to run our water pump, fans, house lights, chargers, etc.

Fortunately for us, the golf cart industry has been running 48 Volts in golf carts for years. As a result, there is an abundance of inexpensive and highly efficient 48 Volt to 12 Volt converters. Unfortunately for us, these converters tend to be on the small side (10, 20 and 30 amp @ 12 Volts seem to be the norm), meaning we would need to use multiple converters to supply enough current. We opted to try the 20 amp ones since we sized half our 12 Volt circuits at 20 Amps.

Here are the circuits we chose to run on the 12 Volt side:

For this setup, we decided to purchase six 20 Amp converters. For the 10 Amp circuits, we would just split the output to share between two circuits. 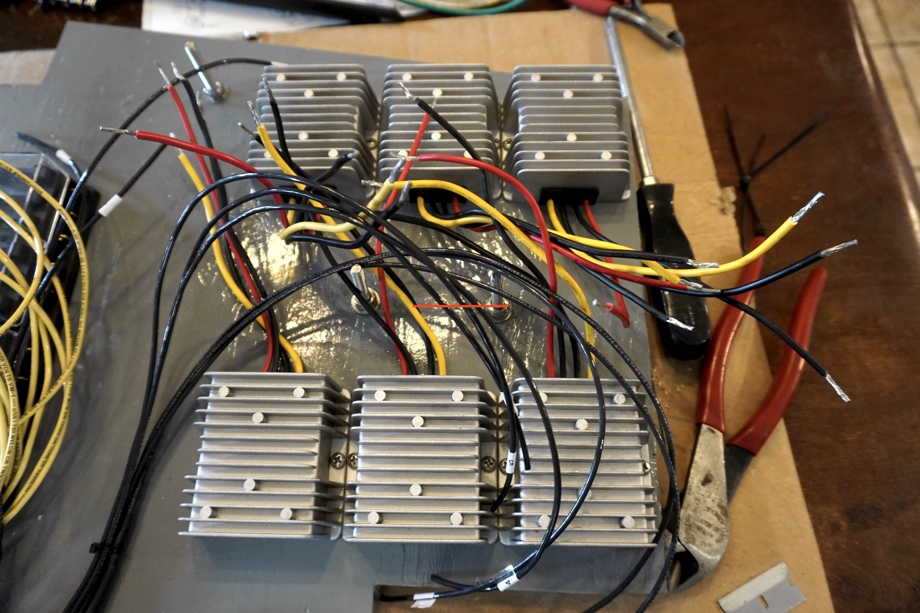 We had one remaining issue. What if we ever need to take our lithium battery offline? Would we be OK without lights, water, fans or chargers?

Since we will be living in this bus full-time, we decided that this was not an OK scenario. In addition to not having lights or water, our refrigerator (120 Volt A/C) would also be down and our food would spoil. We wanted a way to have a "backup" power system on the 12 Volt side as well as a small auxiliary inverter to run our refrigerator in this case. The two large 8-D batteries that power the coach would be a perfect backup.

This, unfortunately, introduced another issue. The output of the six 48V-12V converters should not be shared between circuits. We read on multiple forums not to mix their outputs. Unfortunately, on the coach batteries, they all needed to be tied to the same source (the batteries).

We struggled with this dilemma for quite a while before we stumbled onto using "Bosch style" relays. These would allow us to isolate outputs when running through the 48V-12V converters, but they would also allow for a common source when on the "backup" system. "Bosch style" relays are essentially an electric switch that provides power between three different legs: 1 - the common leg (called "30"), 2 - the "Normally Connected (NC)" leg (often called "87a"), and 3 - the "Normally Open (NO)" leg (often called "87"). 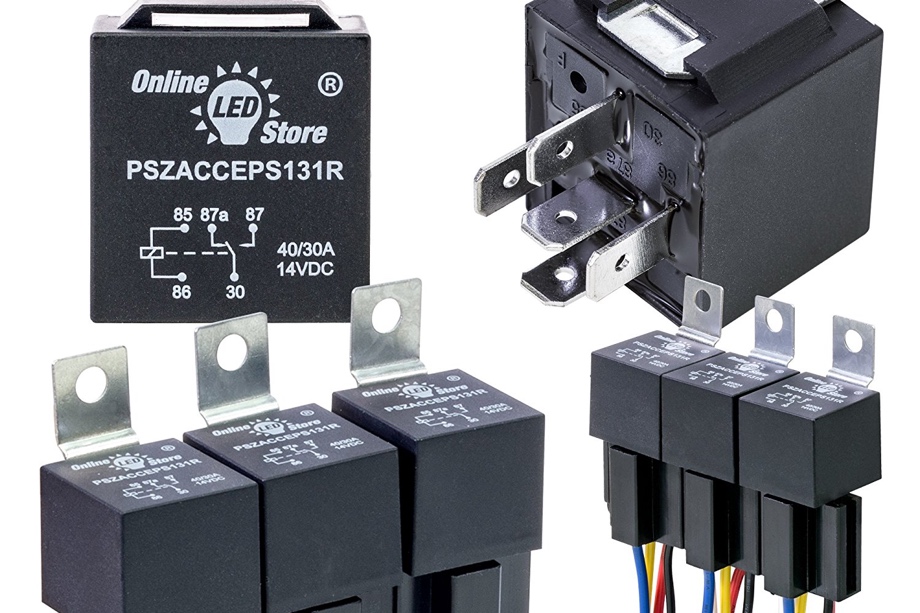 Another interesting thing we read as we researched was about "floating" the negative leads. What this means is that the negative is not connected to a ground or the chassis of the vehicle. There is plenty of controversy about this configuration and how it should be properly fused. Many forums and posts contained information that when you "float" a negative you should fuse both the positive and the negative leads. To be perfectly honest, not all of it made sense to me, but I didn't see any harm in fusing both legs.

We ordered all our components from Amazon - six 48 Volt to 12 Volt converters, twelve relays, and two 12-space fuse blocks. We also sourced wire in yellow, black and red, ring connectors, bullet connectors, spade connectors, and plenty of heat shrink. For our "main" supply wires, we used some 2 AWG cable we had from installing the solar charge controller. When the components arrived, we tested each component on a make-shift rig to ensure proper functioning (we tested every converter and relay).

Finally, we set out to design and build our system. We started by measuring the space we had available in the bay. From these measurements, we were able to cut a plywood board on which to mount all of the components. We like mounting everything on plywood rather than directly to the metal wall of the bay for a few reasons. It allows us to move the entire circuitry as a unit, wood allows for easy mounting and layout planning, and it does not conduct electricity. Another nice benefit is that it allowed us to lay out and connect things in the air-conditioned house instead of the 105-degree bay. 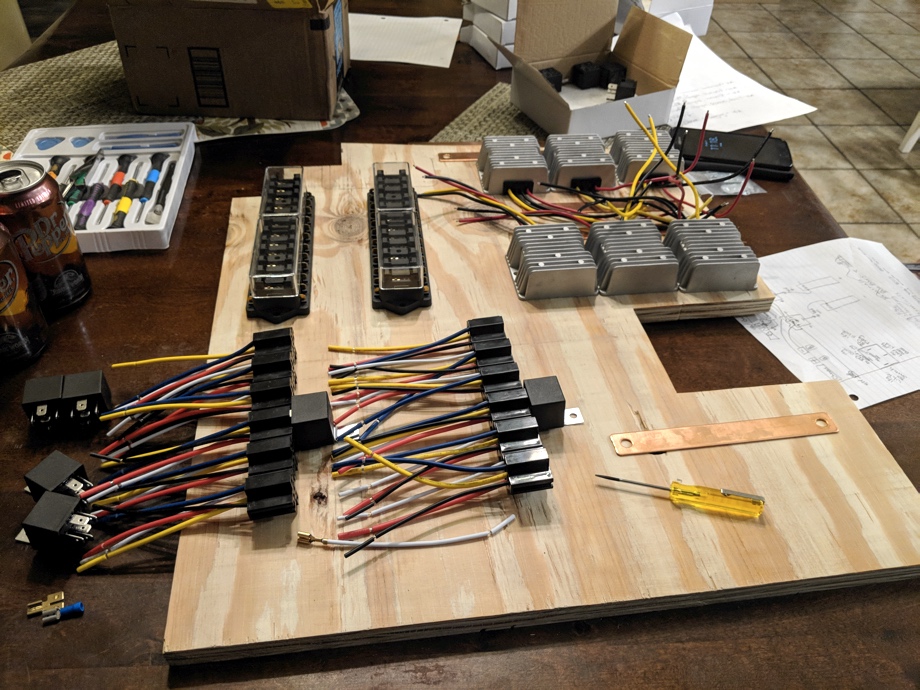 The layout of the components was a little tricky because they are relatively large, so we played with several configurations before settling on our last version. Once we finalized the layout, we decided to mount a few terminal posts where we would need to connect many wires together. These include +12V, -12V, +48V, and -48V. In order to prevent any contact with the metal bus on the backside, we countersank the heads of the bolts into the wood. To further ensure they would never contact the metal wall, we also added pieces of rubber to the wood behind the bolts. 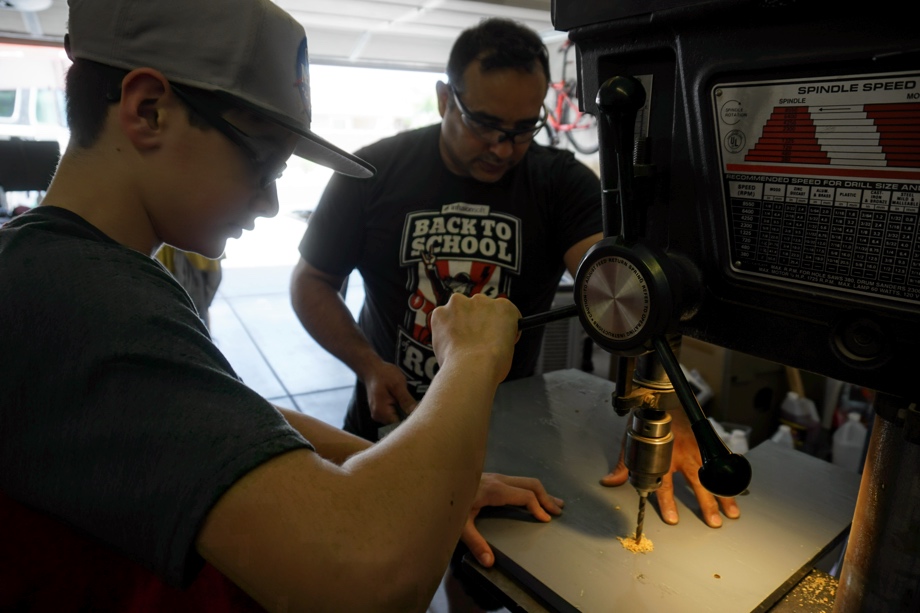 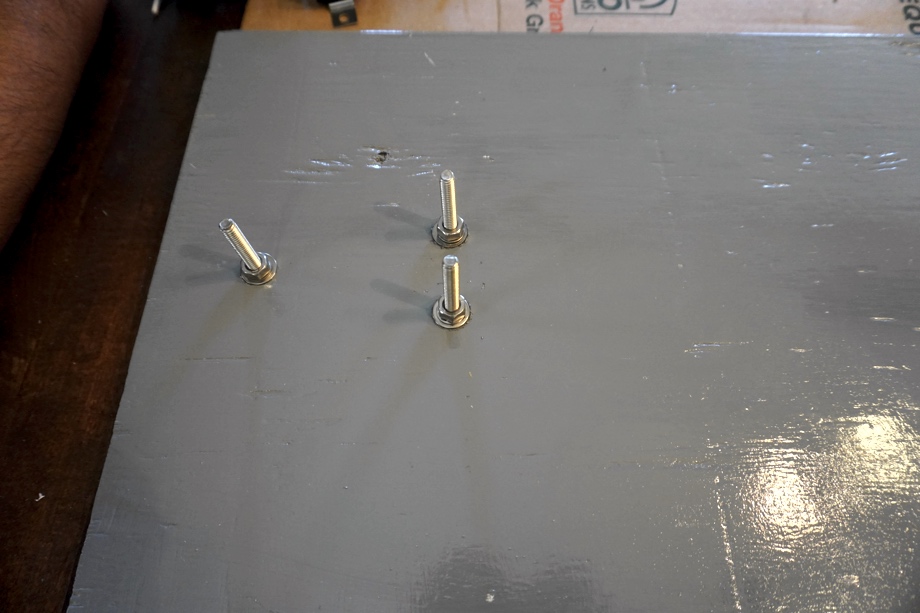 Wiring the components took a few hours of planning, soldering, and zip-tying everything into neat runs. Work like this can be very tedious, but the extra effort in laying things out nicely is worthwhile when something starts to not work correctly. It will be much easier to troubleshoot with a clean installation. We were really inspired by some of the boat wiring pictures we had seen. 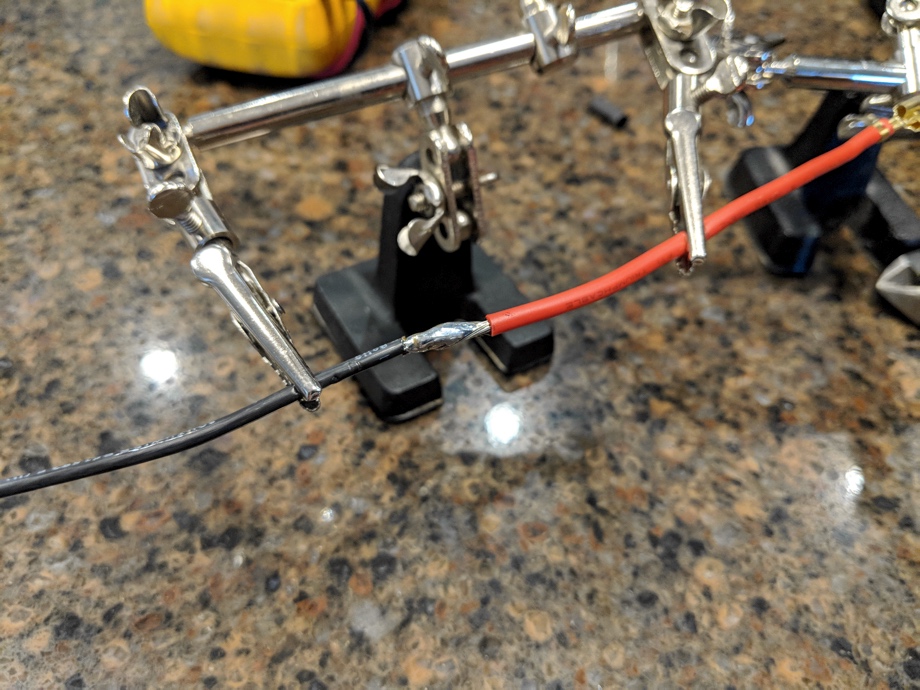 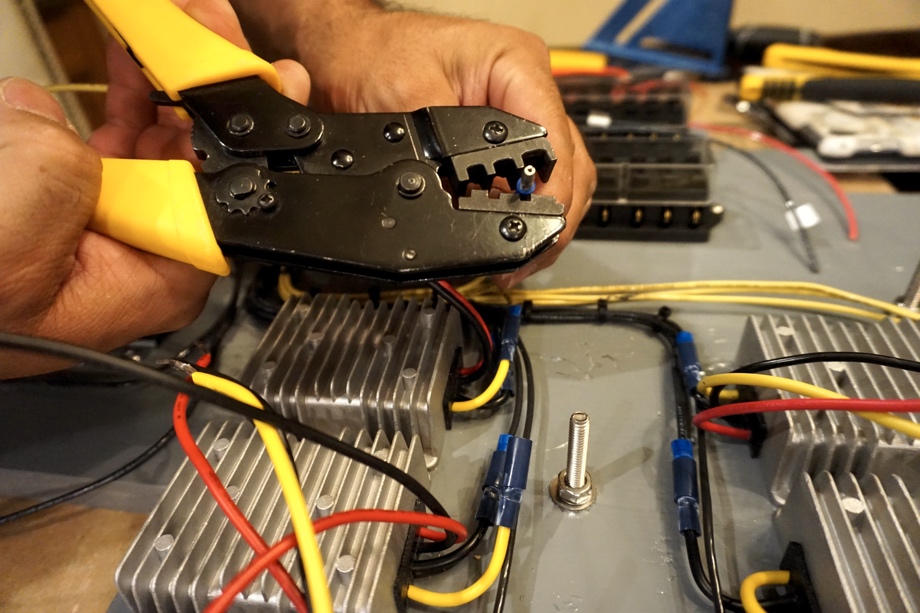 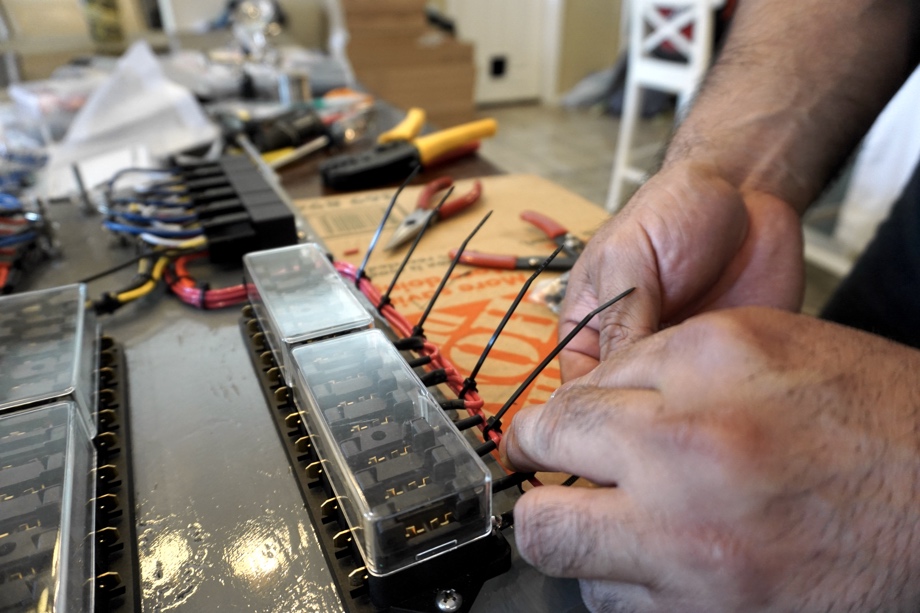 While I soldered and crimped connections, Michelle and the kids sanded and painted the board to match the walls of the bay.

To secure the plywood panel we used a fastener we had never used before, the rivnut. We decided to try these because we were afraid that a self-tapping screw might puncture the fuel tank located immediately on the other side of the wall. Rivnuts also make it easier to remove the panel if we ever need to service it. 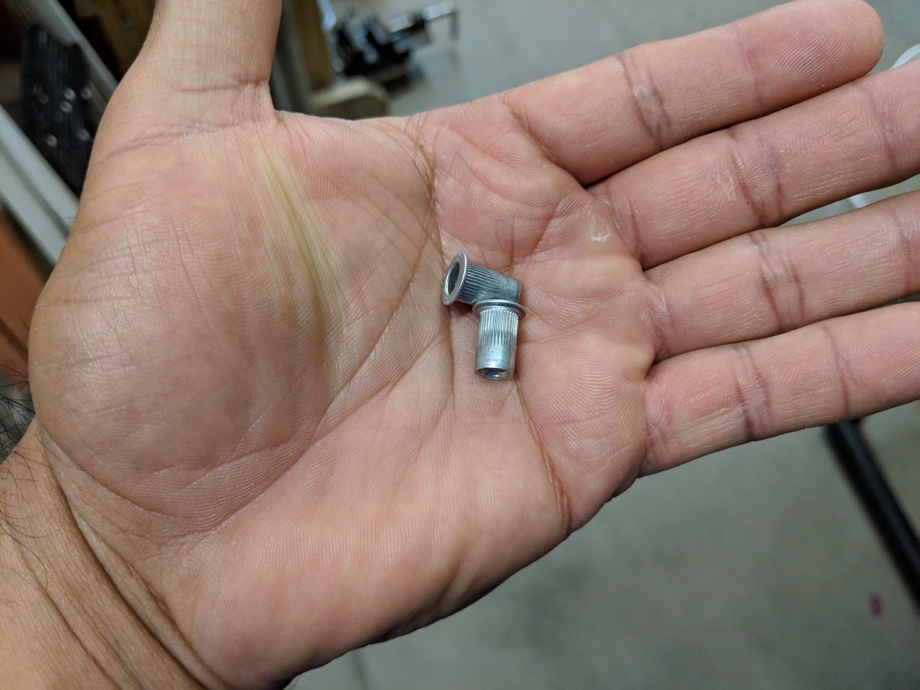 After the panel was secure we made up the 2 AWG cables for the +12V, -12V, +48V and -48V and connected everything. We tested to ensure we had wired everything up properly. We flipped the switch on the DC supply side and "nothing" happened. There were no sparks or smoke or any kind of drama. We put our multi-meter probes on each of the terminal screws and determined that we did have 12Volt power coming from the 48V lithium batteries- hurray! 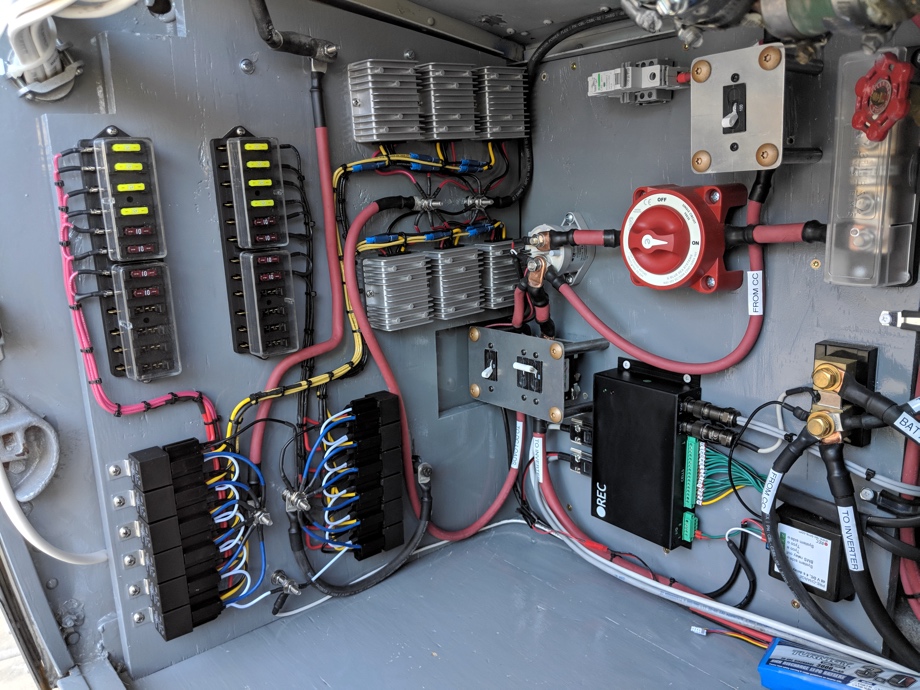 We had not yet installed the wire to the switch to toggle the relays, so we tested by just using a jumper wire temporarily. We shut off the 48V breaker, jumped the relay switch and again verified that we were getting 12 Volts from the chassis batteries. Hurray again!

Up next, we connect our backup power switch, run all the 12 Volt cables, and tidy up all the runs of wires in the bays.