After prepping the strut with the L-brackets and building our own scaffolding, the day had finally come to start installing the solar rack. Or so we thought.

We had picked up our bus from storage just like any other Friday morning. I was following behind the bus in our car, as usual, keeping an eye on the bus while admiring our new tail lights. (I’m still not used to seeing the new LED lights back there.) All was normal driving back to our house. I parked the car while Juan waited for me to direct him back into the driveway. I walked back behind the bus quite a ways, he put it into reverse, and that’s when it happened. In the blink of an eye, our plans changed. I yelled up to Juan, "Oil is leaking everywhere!!" A massive amount of oil had started leaking out of the engine bay. Solar install day canceled. Find and fix the leak instead. Such is bus life.

Luckily, the leak was very easy to find. A brass 90º fitting has sheared right off of a power steering filter housing. Juan thinks the hose was just too heavy for a brass fitting. After some modifications to an extractor tool and quite a lot of effort, Juan was able to remove the piece of the fitting that was broken off in the housing. Thankfully, he didn’t strip the threads. We were able to find the correct fitting to replace the broken one, however, we used a steel part instead of brass. Hopefully, this one will hold up. We installed the new fitting and added a bunch of oil (yes - sometimes these old buses use straight weight motor oil in the power steering). We were so happy that we were able to get that fixed, but by the time we finished, the day was mostly gone. Installing the solar had to wait until the next day. 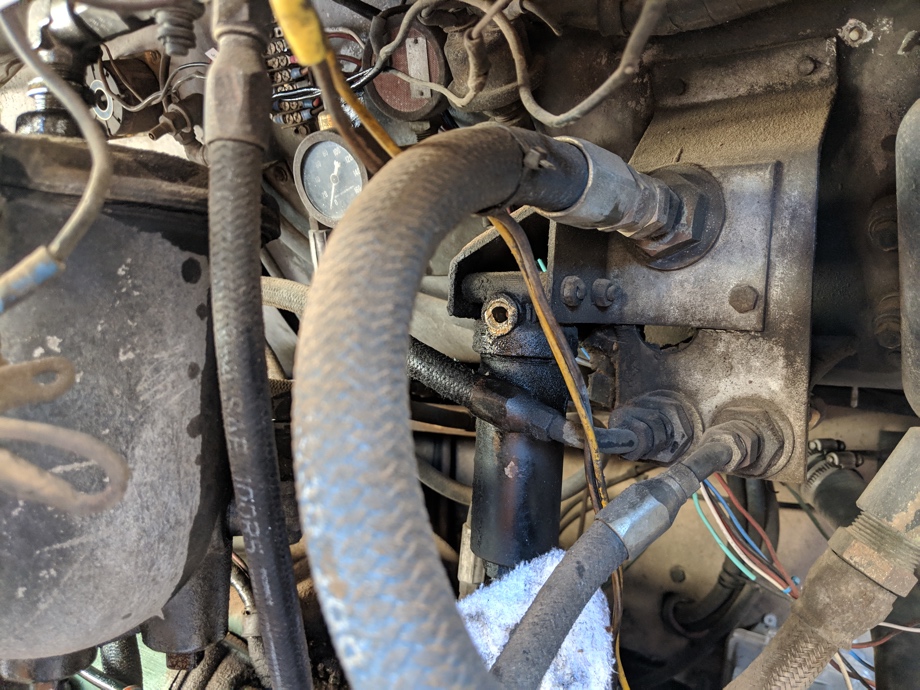 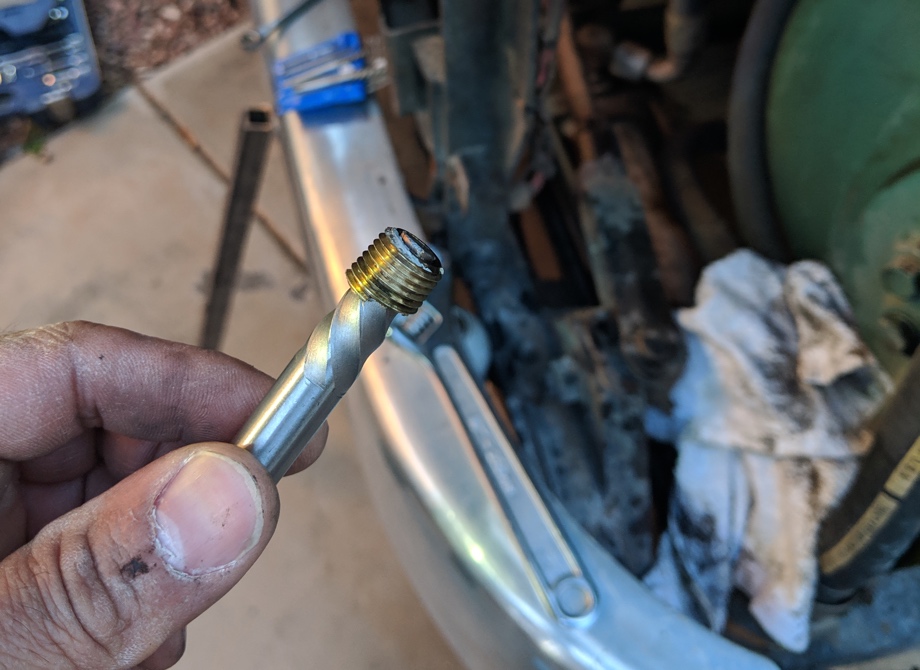 Our wonderful friends Jonathan and Ashley from Tiny Shiny Home came over the next day to help us with the first leg of the install. They renovated their 1972 Airstream, taking it all the way down to the shell and building it right back up to a beautiful, family-friendly, off-grid traveling home. (Seriously, it’s awesome. You have to go check it out.) So, they know just how we feel in the midst of these huge projects. They’ve been there. We love their family and were so thankful for their help. They even made lunch and dinner for our families, with eight kids between us, so we wouldn’t have to stop working and cook. Okay, enough gushing about them, because I could go on and on. They’re the best! 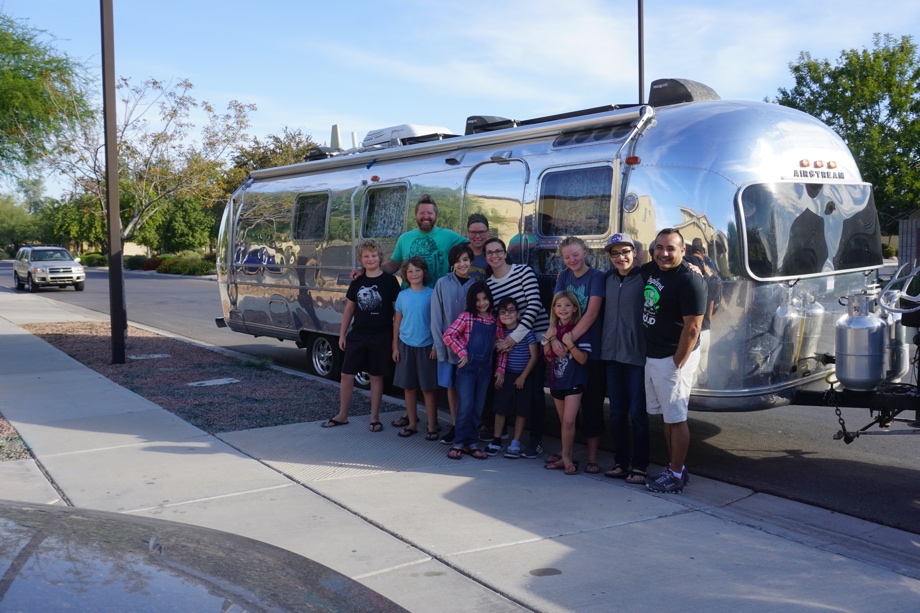 The first order of business was to install the Superstrut rails. Our entire rack is built up off of these rails. (To see and read about how we designed this whole solar rack, head over to the Solar posts.) Making sure they were mounted perfectly straight, parallel, square, etc. was the most important part of the entire install. We used the upper racks to know exactly how far apart to space the rails and square everything up. We had a train going of Ashley and some of our kids down on the ground handing the appropriate rails and racks up to Jonathan and Dominic on the scaffolding. Then, Jonathan and Dominic could then hand them up to Juan and me up on the roof. A perfect system. 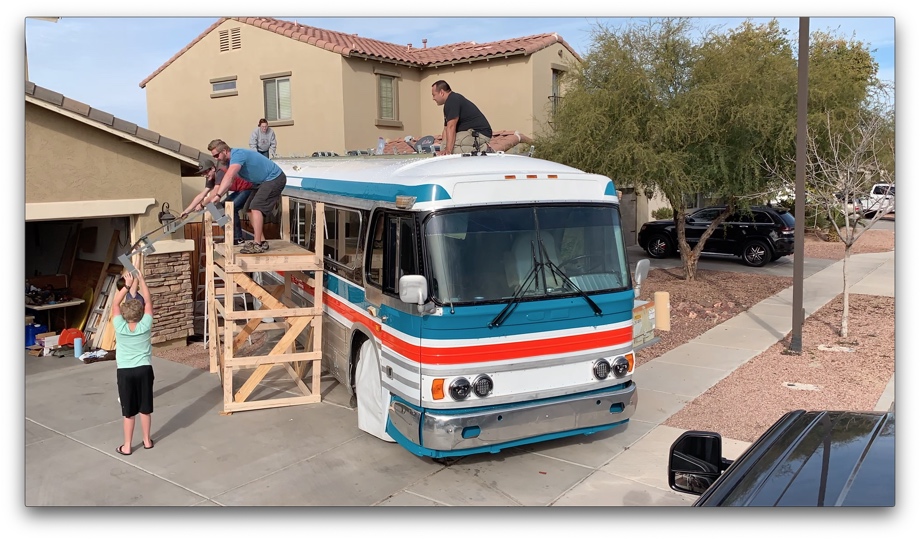 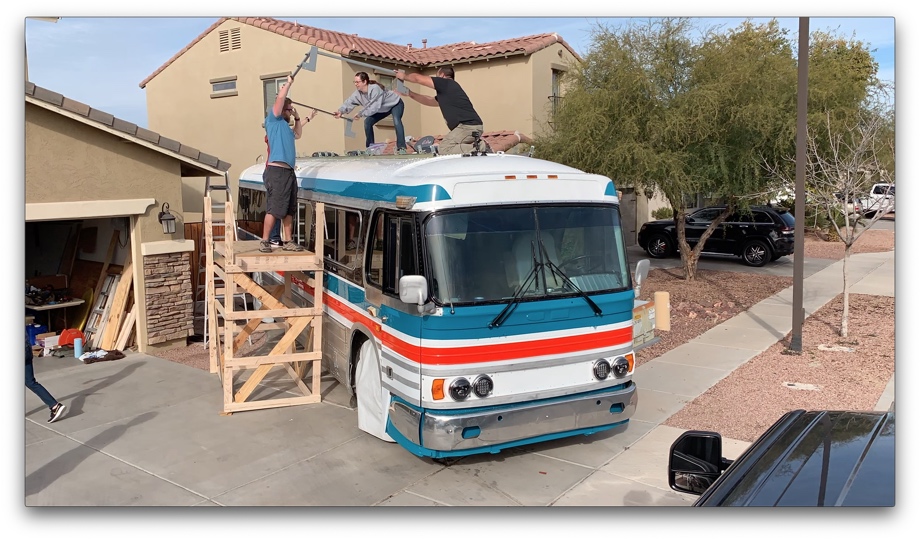 Of course, we did make one change along the way. Our original plan had been to bolt the rails directly onto the roof. However, once we had the rails up on the roof, we realized that there were a couple of spots where the rails would be sitting up on the heads of rivets. That wasn’t going to work. The good thing was, addressing that issue actually prevented us from making a mistake. Our solution to the problem was that instead of just bolting them flat onto the roof, we added a couple of washers and a nut underneath the strut first. This solved the problem by elevating the entire rail about ½” above the roof, avoiding all the rivet heads and keeping the rails straight. The bonus that we hadn’t really considered before is that by creating this gap under the rails, it prevents any rainwater from getting trapped in the “channel” between the rails. It will just run off under the rails. 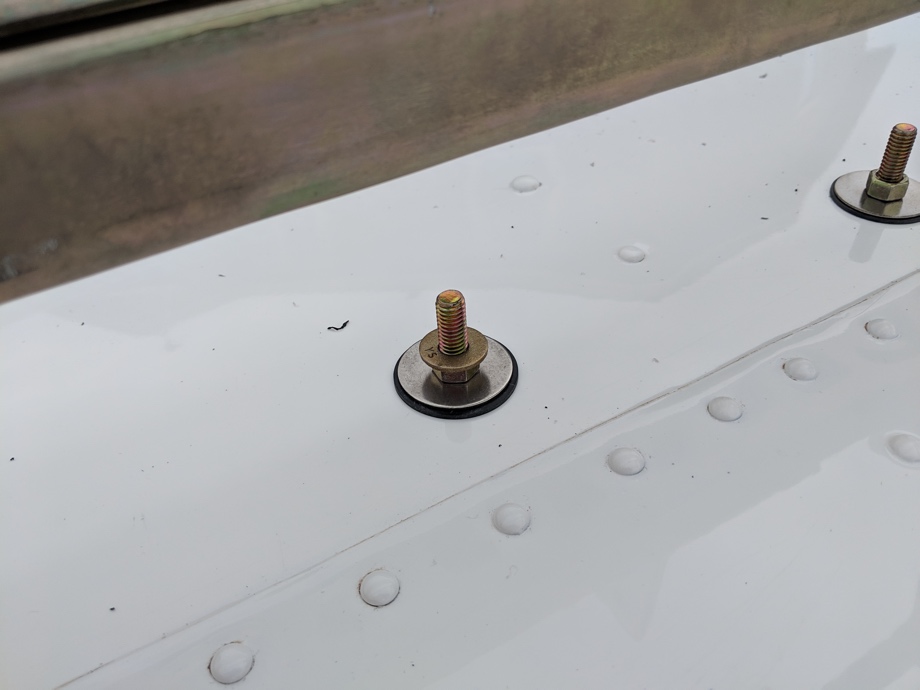 Once we had that new plan, the drilling began. We secured the rails through the roof with many ⅜” grade 8 bolts and nuts - 62 of them, in fact. Obviously, with all of those holes, we needed to make sure that none of that will leak. We used rubber washers on both sides of the roof, sandwiching the aluminum roof between them and securing those with stainless washers. The next day, we went back and used a sealant called TremPro635 all over the washers, as an additional measure. The funny thing was, before we ever got to putting the sealant over all of that, we had a major rain storm. Not a single one of our bolts with the rubber washers leaked. We still wanted to add the extra sealant though since rubber will degrade over time in the sun.

On the inside of the bus, we made giant “washers” for all of those bolts out of ⅛” flat steel bar. These bars overlap the edges of the ribs, making the rails even more secure on the roof. Jonathan and Ashley did most of the work of getting these “washers” drilled out and prepped, and then installing them and feeding all the bolts through the roof. This project would have taken us days without them. 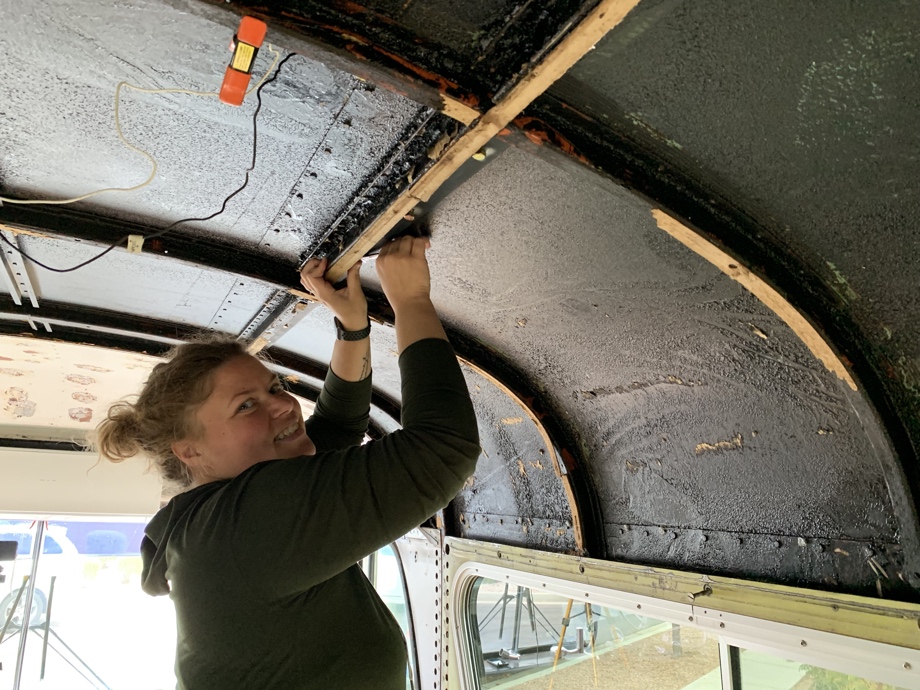 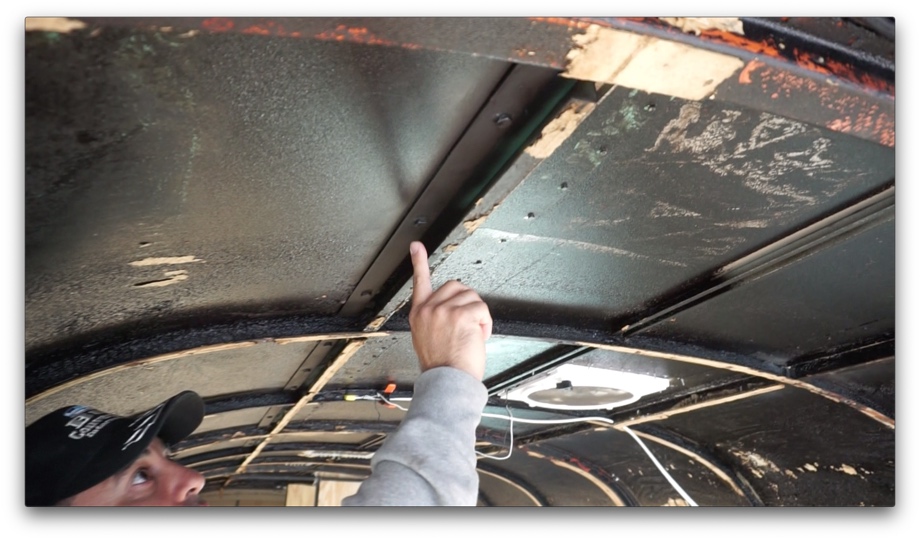 Finally, the rails were up, the upper racks were secured, and everything was bolted down and sealed tight. It was a long day. It was a good day! 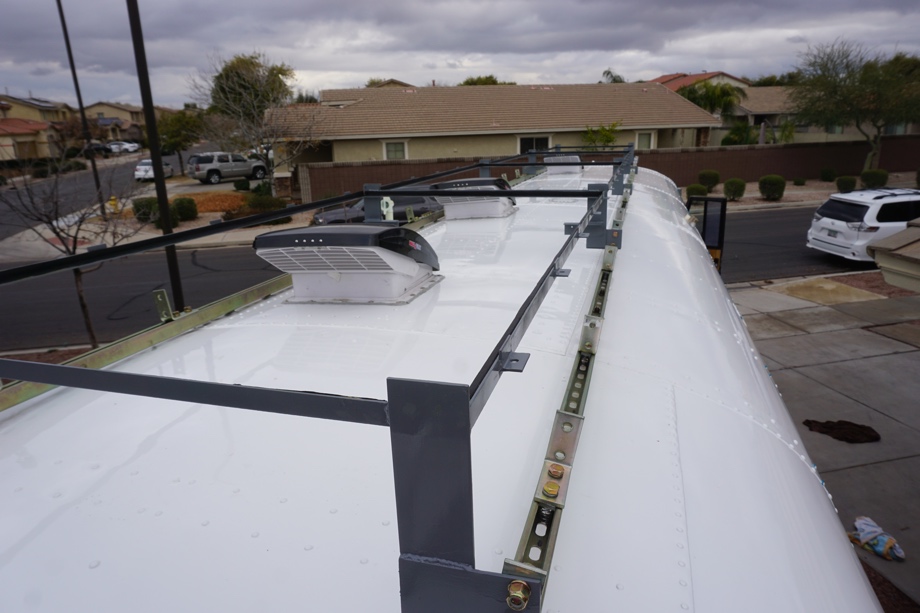 Next up: Installing the lower sliding racks and mounting the panels.