When we were building the bus at our house, power was never an issue. Even in the ridiculously hot summers of Phoenix at over 110℉. We plugged in all of our power tools to the house and ran our bus air conditioners off of the solar and battery all day long.

Then, we moved our bus build-out to my uncle’s off-grid workshop property. It was great for the first few months in the spring and early summer. With 3480 Watts of solar panels on the roof and 24kWh of battery, we could easily run all of our air conditioners (a 12K BTU mini-split and two 5K BTU window units) and power all of our power tools (welder, table saw, drill press, 6HP shop vac, etc.). Throughout March, April, and into May, we were seeing well over 3200W on a regular basis, and in perfect cloud-edge conditions we would even see up to 3700W. 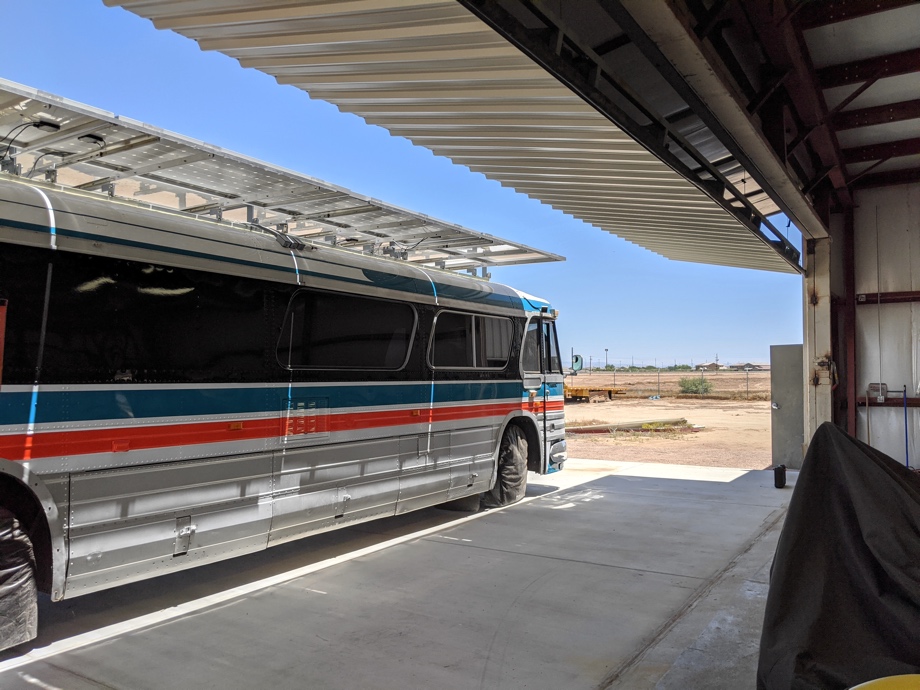 Everything was good in the power department up until the temperatures were consistently above 105℉. That seems to be the threshold for maximum power output for our solar panels. After that, the solar panels just get so hot that thermal resistance increases to a point that energy production begins to drop. When our temperatures here were consistently between 107-116℉, the most we were seeing was about 2900W. And that is on a clear day mid-afternoon in June in Phoenix.

One thing to note is that we do keep our charge controller, inverter, battery, and electrical components in an air-conditioned bay, so we knew we weren’t losing efficiency due to those components being too hot (most of ours are rated for max efficiency at 77℉ which is the temperature we keep that bay). 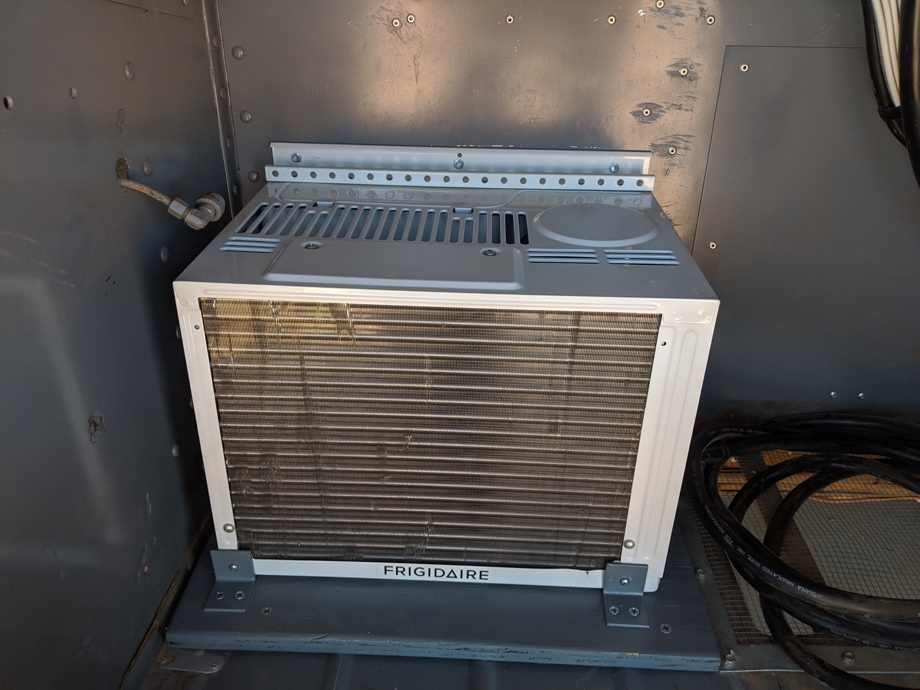 2900W is still a lot of power. However, our air conditioners are having to work at full capacity all day long. In addition to that, we are running very high power tools all day long. So, it’s kind of the perfect storm of conditions to start operating at a net-loss for power.

Under 105℉, we could float along all day using all the power we wanted and keep the battery between 90-100%. Overnight, the refrigerator, security camera, inverter, etc., drain the battery by about 10%. By about 9 or 10 the following morning, the battery would be back up to 100%. We would just truck along all day without a care in the world for power.

Above 105℉, with solar production down due to the heat, we could no longer maintain that 90-100% battery through the day while also using all the air conditioners and power tools. Each day we were losing about 10-15% during the day, then the additional 10% at night.

This was a big problem for us because we work on the bus for four days per week. We could make it about 3 ¼ - 3 ½ days before draining the battery, but then we couldn’t finish out the fourth day.

Here’s where we get into the project. Our solar panels are commercial panels that are hard to come by (Sunpower E20 435W). We bought our original 8 panels off craigslist. However, there is a solar business just a couple of miles from our house called SanTan Solar that sells both new and used panels. Their used panel offerings are often changing based on what’s available. We always just kept an eye on what they had. About a year ago, they happened to get in a batch of our E20 panels and were selling them at an amazing price ($170 each I think). We decided to scoop up two more to have “just in case” something were to ever happen to one of our roof-mounted panels. They are very hard to find so we jumped at the chance. We actually haven’t seen them again since, so we are glad that we got them.

Fast forward to this summer. We needed more power to make it through the summer. We thought about just buying a small generator to augment our system. However, we thought we should give these extra solar panels a chance. Could they be enough to bump us back to where we were in the spring and early summer? We decided to ground deploy those two extra “just in case” panels that we had just sitting around. We ran down to SanTan Solar and grabbed some solar wire and splitters and got to work hooking them into our system for an additional 870W.

Our 8 rooftop panels are configured 2S4P, so we wired these two panels in series with each other and added them in parallel with the other panels. We now have 10 panels in 2S5P configuration for a total of 4350W between the roof and the ground deploy. We should probably mention that we have a Victron 250|85 Smart MPPT controller that allows for a maximum PV Array size of 4900 Watts. At 4350 Total Watts, we are still well below the theoretical maximum for the controller.

We tested it out for the first four-day bus work week. It was about 107-110℉ that whole weekend and those additional panels were just what we needed. We were back to making 3500W and keeping up with all of the air conditioners and the power tools. The battery stayed between 90-100% throughout the day, just like before. It was fun to see that on a couple of perfect cloud-edge occasions, we actually hit about 4600W. That was fun! 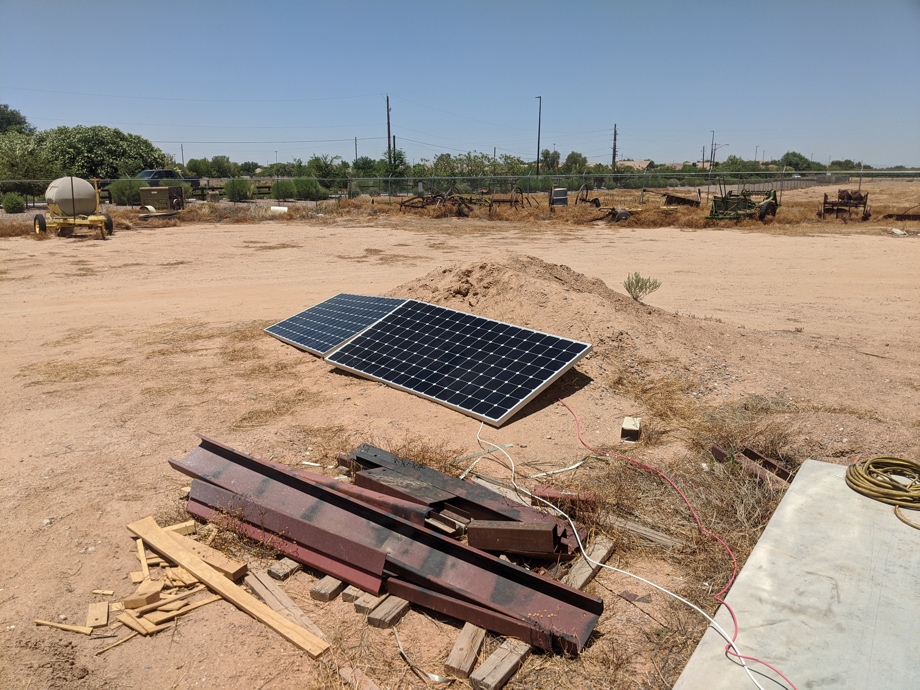 It was just enough. That was great news! We built a small framework for these two extra panels to get them up off the ground and tilted at the appropriate angle for summer in Phoenix (turns out this is about 17 degrees). 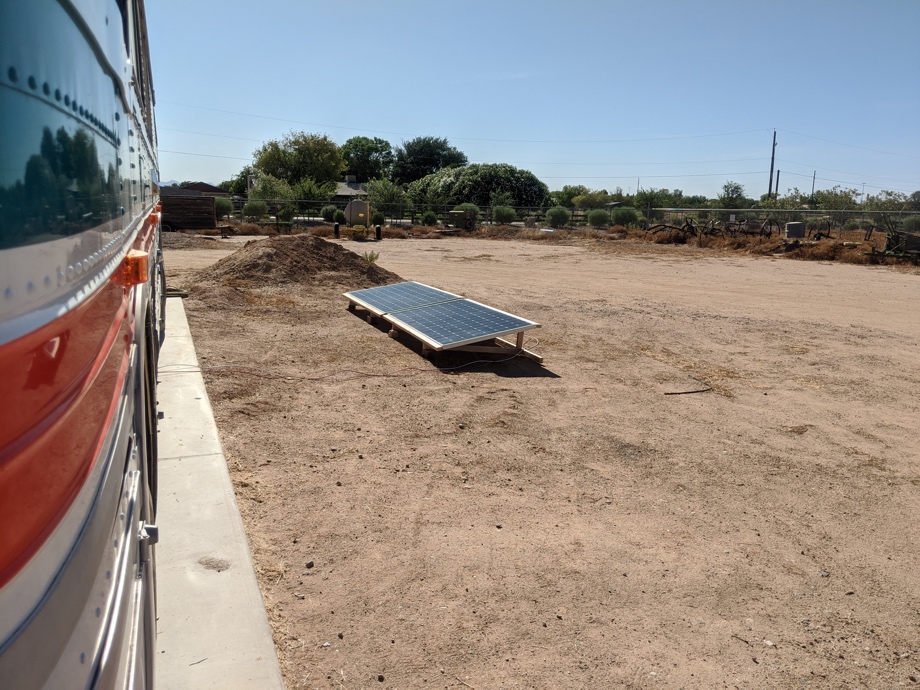 This project was done in mid-June. It is now early September, so we have been using this augmented system for nearly three months. It has been the hottest summer on record for Phoenix with more days over 110℉ than ever before. As of September 5, I believe we are at 52 days over 110℉. It has just been brutal. Thankfully, the extra 870W has served us well and we have been able to keep up with the air conditioners working their absolute hardest plus using all the power tools. We can safely say now that we have tested the system to the limits, and it has passed.

This has been a great experiment for us. Luckily, it is all just temporary. When we travel, our power needs should not be nearly this great. We won’t be running 2HP table saws, welders, band saws, etc. Also, we hopefully won’t be traveling in this extreme heat for extended periods of time. We know that our original 3480W panels keep up no problem under 105℉. So, the plan will be to leave this ground deploy set up and the extra panels here in Arizona when we are traveling. They will be here “just in case”. If we do need to carry a generator, this experiment has convinced us that a very small one will serve us well.

After sorting out our power needs so we could continue building the bus on this off-grid property throughout the rest of the brutal summer that was to come, we got back to work. Coming up next: Shower plumbing